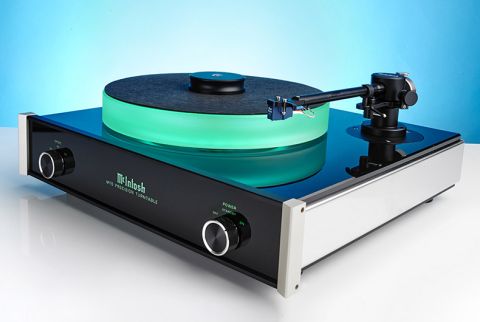 Few high-end companies can boast a heritage like the McIntosh brand. It’s easily one of the oldest around, founded in Maryland, USA in back in 1949.

In comparison, the likes of Mark Levinson, Krell, and Audio Research are just getting started.

Over the years McIntosh has made pretty much every part of the hi-fi chain, but the brand is best known for its distinctively styled amplifiers.

A new McIntosh turntable, however, is a rare thing. With the introduction of the MT5 the company now has just two in its books, and the other one, the MT10, was introduced back in 2008.

Considering that its current expertise lies more in electronics, and to a lesser extent, speakers, we wonder whether the company can truly deliver on the record-playing front.

Given that context it made sense for the brand to collaborate with a company that specialises in all things vinyl, and in this respect there are few better choices than Clearaudio.

That tie-in becomes obvious when you see the MT5’s magnetic main bearing (with its ceramic shaft), which mirrors the design used on our reference Clearaudio Innovation Wood turntable.

In this clever engineering, there is minimal contact between the top and lower sections of the bearing, limiting noise levels.

McIntosh’s main engineering input, predictably, comes in the electronics, with the company designing the power supply and reworking the motor.

This collaboration between these high-end audio giants results in a deck that’s as close to plug and play as we’ve seen at these price levels.

The MT5 is a breeze to set up. It comes with both arm and cartridge attached and aligned. The cartridge is the well-regarded Sumiko Blue Point No.2 – a high output moving coil design – which, bought separately will cost you around £200.

Of course, the MT5 design is capable of handling far more ambitious designs, but as a step-off point this cartridge is still talented enough to show what it can do.

Once you take the deck out of the box it takes a matter of minutes before you’re listening to music.

You’ve got to add a bit of oil to the ceramic bearing shaft, fit the two-part platter assembly in place, move the counterweight to the pre-designated spot on the arm, and off you go.

Oh, and don’t forget to fit the drive belt. Not much will happen without that.

This record player is a nicely engineered unit. Its chassis is a rigid, but damped combination of stainless steel and alloy topped off by an acrylic top panel.

The front controls mirror those of McIntosh’s amplifiers but here they control the on/off and speed functions.

The acrylic platter is a relatively hefty unit, weighing in at around 2.3kg. This mass gives a flywheel effect that helps with speed stability.

It’s beautifully made, with a precision that makes it hard to tell whether it’s spinning or not, so accurate is the manufacture.

Power on the MT5 and the platter lights up with the kind of light show you get with McIntosh’s amplifiers. We like the effect. It adds a visual drama that most of its competitors lack.

The platter is driven by a high quality Swiss-made DC motor, which is controlled by a servo system to compensate for load and power fluctuations. Three speeds are offered: 33 1/3, 45 and more unusually, 78RPM.

It’s far more convenient to be able to change speed electronically rather than the back to basics moving the drive belt from one pulley step to the next that many high-end decks still adhere to.

The tone arm is also nicely made. The bearings feel smooth and precise, and it uses Clearaudio’s trademark magnetic antiskate adjustment mechanism. As with the rest of the MT5 this arm feels like it’s built to last.

There’s a lid for the deck too, something many rivals omit.

Such a cover may not do much for performance but it does mean your pride and joy will be protected from dust and inquisitive little fingers, which can’t be a bad thing.

In our experience all turntables work best when placed on a rigid, low resonance support, preferably well away from the speakers.

The MT5 proves no exception, which is no surprise considering the lack of a traditional sprung suspension system. However, given such a support, and a suitably talented system it produces some fine results.

We use our usual reference set-up of Cyrus Signature/PSX-R2 phono stage, Gamut D3i/D200i pre/power and ATC SCM50 speakers and find much to like in the McIntosh’s performance.

We start with Bruce Springsteen’s Born to Run. The McIntosh has a fast and agile sound, one that picks up quite a lot of detail.

There’s plenty of energy here, and no shortage of punch. Rhythm tracks charge along with enthusiasm, while Springsteen’s passionate vocal delivery gets centre stage.

It’s quite a dense album and we feel the MT5 package doesn’t separate out the instrumental strands quite as well as we’d like, but we suspect a change to a more ambitious cartridge will fix that.

Tonally, there isn’t much to complain about. This combination sounds even enough to avoid criticism and has the top-end refinement to stay enjoyable even with some less than perfect recordings.

We move to Kind Of Blue by Miles Davis. With the right kit, this recording can still impress thanks to the sheer presence and solidity of the sound. The MT5 package doesn’t disappoint.

It sounds surefooted, delivering shifts in dynamic intensity with confidence and tying the various instrumental contributions together well.

Changes in pace are conveyed with skill, while the album’s complex rhythm flow comes through with clarity.

Sound staging is pretty good, though there is a lack of expanse when things get complex. The MT5 never sounds confused but the space around instruments tends to shrink when a piece of music becomes complex.

We notice this on Orff’s Carmina Burana, but it isn’t enough to spoil our enjoyment. Here we’re impressed by the McIntosh’s enthusiasm and it ability to stay composed when the music gets demanding.

There’s plenty of punch here, and the ability to supply a full dose of the excitement on offer. We’re also pleased that the MT5 can couple these strengths with an ability to render low-level instrumental strands with subtlety.

There are definitely brains behind that muscle.

The McIntosh MT5 is an impressive turntable. We can’t think of a high-end alternative that’s as easy to set-up, and few that are as nice to use.

The general standards of build and finish are good, and the sound quality, while not outstanding, remains exciting and enjoyable.

For some those looks and the McIntosh brand name would be enough to get their credit cards out, but the MT5 is more than that.

This is a truly capable unit that can stand up to any class rival without embarrassment. We like it a lot.

See all our McIntosh reviews