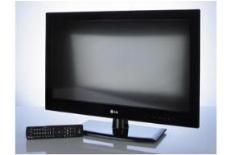 LED backlighting is not a guarantee of picture quality; here it disappoints

It usually takes a while for the top tech to make it down to tellies this size, but in the same year that LED backlighting has become the spec du jour at the high end, it's already found its way into LG's 26LE3300.

Unsurprisingly, the company's gone for edge lighting rather than full array, as it keeps the depth down (here just 34mm).

That sounds great for wall mounting, but beware; the majority of connections face straight out of the back, so you're going to need a wall bracket that creates a space of at least a few centimetres if you actually want to plug anything in.

So if the thinness isn't actually much of a bonus, at least the LED backlight must improve contrast, right?

Actually, no: right from the box the LG has a pale, undynamic picture.

The only way to coax anything like real blacks out of it is to turn the backlight to its minimum, which unsurprisingly sacrifices almost all of the picture's punch.

The LG isn't all bad, though. Its take on the Doubt Blu-ray isn't as crisp or neutrally coloured as the best, but it's perfectly watchable, and boasts decent motion.

Plus, it gets a little closer to its rivals when you ask it to upscale a DVD or Freeview programme. The lack of contrast still hampers it somewhat, but there's reasonable detail, impressively little noise, and a better – though still not perfectly natural – colour palette.

It also sounds good: direct, open and detailed, though a little brighter than the most controlled in the test, but that's not quite enough to make up for its flaws elsewhere.