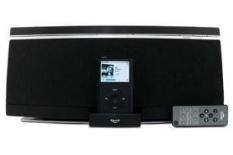 Simple and effective, one RoomGroove is a sensible choice and two even more so

At first glance, Klipsch's RoomGroove is the least expensive iPod dock when we tested it and, by extension, had the least to prove. After all, it found itself lining up against the Zeppelin dock from B&W that costs far more.

And now Klipsch has slashed the price of the RoomGroove even further, dropping it from £200 to £130 while stocks last. That's very good value indeed.

The RoomGroove is designed to wirelessly transmit the music your iPod is playing to another RoomGroove stashed elsewhere in your home. In other words, you can buy a wireless multi-room system for £260.

Let's get the wireless aspect out of the way first of all, before we get stuck in to the sound quality. It's a simple system, but no less effective for that – each RoomGroove has a button marked ‘Transmit'.

When playing an iPod (or an auxiliary piece of equipment through its 3.5mm input), press the button and – hey! – the RoomGroove transmits the audio to your other RoomGroove.

There's a dial on the back of each dock to select a transmission frequency and avoid interference from other wireless systems – your own or your neighbours'.

Well-integrated audio
This is all well and good, of course, but if it doesn't get the fundamentals right then its snazzy wirelessness is neither here nor there.

The RoomGroove is properly, if unremarkably, finished and bears more than a passing resemblance to Bose's SoundDock, right down to the way the dock is recessed into the machine.

Just a touch of the Klipsch logo is enough to bring it sliding quietly out. There's the aforementioned 3.5mm input, a cheap-feeling remote control and, well, that's it.

Playing Red Snapper's Seeing Red, the Klipsch gives a good account of itself. It's a little short of outright scale and can become flustered at higher volumes, but in every other respect it sounds well worth the money. Low frequencies are sensibly judged, with none of the histrionics other systems employ.

At the opposite end, a little less sparkle would not go amiss at times, but treble sounds are similarly well integrated. Timing is good, tempos roll by authentically and voices are natural.

If it's a simple multi-room system you're after, they don't come much more straightforward than this. The Klipsch isn't the most exciting you'll hear, but it is among the least frenzied at the price.