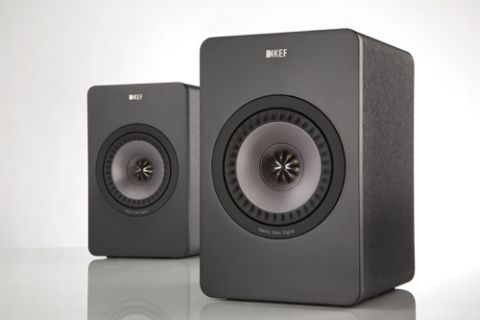 A niche design, but these KEF speakers will please some with their smooth, detailed sound

When we struggle to find a benchmark for a new product sent in for review it usually indicates one of two things: that the manufacturer is making a bold play for an unoccupied part of a market, or that it’s come up with something that falls between stools.

Having spent days pondering it, we suspect the KEF X300A speakers are more of the latter than the former, but that’s not to say we don’t like them.

Billed primarily as a pair of desktop speakers, we find it hard to imagine that many people are lucky enough to possess a desk big enough to accommodate the 18x22cm footprint of each X300A speaker. Luckily they’re also tuned for placement on a stand, with a switch on the back altering the EQ to suit a position in space.

But we have a feeling that those people looking to use the KEF X300A speakers as a dedicated, freestanding system might be looking for more flexibility than the single USB and single 3.5mm aux-in that are on offer. What if you wanted to add a CD transport or hi-fi streamer, for example? And a remote control would be nice.

So the X300As are a rather niche proposition, but if they fit your particular requirements there is a lot to like here. We’re rather taken with the aesthetics, for a start.

Their traditional bookshelf speaker-like looks combine with a lovely graphite finish and KEF’s trademark tangerine waveguide to produce units that are as traditional as they are modern. They’re certainly stylish.

In each speaker there are two class A/B amps, one for each driver – an arrangement that’s designed to improve control and reduce distortion. It works.

No matter how loud you play the X300As (and we played them very loud indeed) no nasty buzz, boom or fuzziness appears to ruin your party-rocking levels of enjoyment, and the three elements of the tonal spectrum are as balanced as you could want.

There’s seemingly endless detail here, too – especially when the X300As are fed a high-resolution 24-bit/96kHz recording.

We thought there was nothing left to be heard on Fleetwood Mac’s Rumours, but the HD Tracks download starkly reveals the contrast between the resignation of the verse and the bitterness of the chorus to Gold Dust Woman. The degree to which the KEFs spread the stereo image is another triumph – this is one expansive soundstage.

This isn’t sonic perfection, though: the KEF X300A speakers are rhythmically and dynamically challenged. While individual notes start and stop with relative precision, their relationship to one another is less well defined, and the result is a lack of punch.

On top of that there’s a flatness to dynamics that means Tool’s Lateralus simply doesn’t build with the kind of threat and drama that it should, and when the intro crescendos it’s in a slightly half-hearted manner.

For a while these seemed like fatal flaws, with the sound failing to engage, but after a great deal of running-in the X300As came to life a bit.

Had they not we’d be looking at a three-star verdict, but as it is the term ‘relaxed’ turns out to be a better fit than the ‘boring’ we were originally considering.

These KEFs have a character that’s easy to listen to, but hard to fall in love with – and that’s despite the exceptional integration and superb detail.

And that – combined with the fact that they’re going to be of such niche appeal – means the KEF X300A speakers will have to settle for four stars.