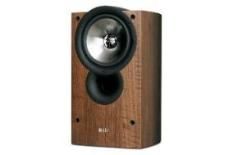 Our favourites of the iQ range so far, but be careful not to goad that tweeter

Much as we try to be prepared for any eventuality, the ferocity of opinion on the www.whathifi.com forums that greeted our original First Test of KEF's iQ50 floorstanders (of which these iQ10s are little brothers) took
us aback somewhat.

That snafu is outlined at length in the January 2009 issue, on p35's second First Test (now there's something you don't see every day) of the iQ50s.

Here, suffice it to say that our iQ10s are exactly the same as everybody else's.That's unequivocally a good thing. From their gently curving cabinets to their intriguing UniQ tweeter/driver arrangement, from the standard of their build and finish to their confident, spacious sound, the iQ10s are the sort of speaker that you need
to see and hear.

Given a testing tune like Bill Nelson's Another Day, Another Ray of Hope to deal with, the KEFs supply a lively and attacking sound.

There's decent scale to the overall presentation, with an open, natural tonality across the frequency range. Voices are handled assuredly, with plenty of character and expression retained, and low frequencies combine weight and speed to good effect.

There's a suggestion of bite to the swaggering high frequencies that implies system matching will be more critical here than with some other contenders, but avoid amplifiers with the same fricative enthusiasm and you should have no problems.

Spacious, eloquent sound
Even Lakim Shabazz's Pure Righteousness is handled deftly, the KEFs refusing to be pushed around by the song's springheeled dynamics or martial punch.

But it's the straight lines and 4/4 discipline of the song that show up the one chink in the iQ10s' armour: a relative lack of organisational skills. The recording is never allowed to become unruly or dictate terms, but the KEFs can't organise the various threads of the song as rigorously as, say, the Award-winning Dalis.

As shortcomings go it's relatively minor, but when pitched into a battle with other speakers as capable as some of those gathered here, any weaknesses are bound to be pounced upon.

While it may be enough to rob the KEFs of that fifth star, this limitation certainly shouldn't be used as an excuse not to hear the iQ10s. If you value a spacious, emotive sound and an eloquent vocalist, they should be near the top of your ‘to demo' list.