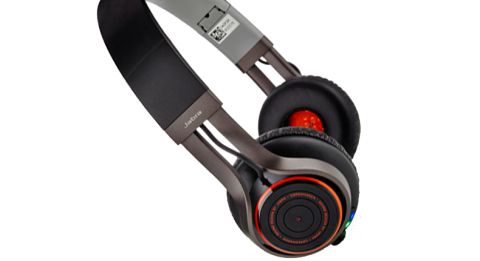 Tapping and swiping are actions more associated with the touchscreen of a tablet or smartphone, than a pair of headphones. The Jabra Revo Wireless ‘phones don’t have a screen, but they can be controlled through a touch-sensitive surface.

Jabra calls it the ‘Turntable Touch Control’. Like a DJ scratching a record, you slide your finger clockwise around the outer edge of the right earcup, and volume increases. Going the opposite way takes it down. Tapping the front edge twice skips a track, while tapping the rear of the circle pings you back.

In practice, the whole system works rather well - it’s responsive to your finger movements and you feel more confident using this than you do the equivalent system on a pair of JBL S400BTs.

Build quality is okay, but the plastics don’t feel that solid. On the positive side, our ears only appeared lukewarm after prolonged use.

If you want to get fancy, you can use the headphones in conjunction with the ‘Jabra Sound App’. This gives you the ability to add Dolby Digital Plus processing to the music stored in your onboard music player via a skin that sits over your devices standard player.

In practice, sound quality isn’t really improved; if you don’t load up the app, therefore, it’s no great loss. Musically, the Revo Wireless headphones do not offend. Lows don’t sound fat or boomy, nor do highs sound sharp or bright. Detail levels are okay, but our overall opinion is this doesn’t make for a very memorable listening experience.

Dynamically they feel restricted, and reduce the various elements of a track to something too safe and unexciting. Tracks such as Prince’s 1999 should sound lively and full of beans, but this classic 80s synth-pop classic never really gets out of first gear.

The keyboard and percussion are limited in their dynamic reach and the Jabras don’t really communicate the upbeat, exciting tempo of the track.

The touch control system wins the Revos a few brownie points, but it can only take them so far. We’d prefer the intuitiveness and better sound quality.