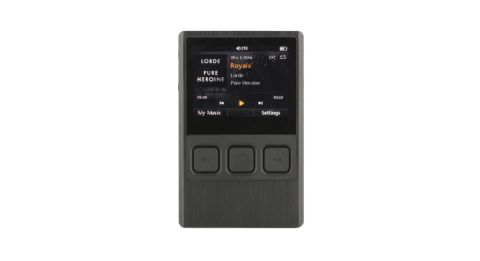 Enjoyable and affordable way to listen to hi-res audio, but not the last word in sound quality and barely the first in ergonomics

There are things we think we know about portable digital music players, but the iBasso Audio DX50 contradicts a few of our suppositions.

Physical proportions, for instance. The usual ratio of height/width/depth is instinctively known by anyone who’s ever held an iPod or a mobile phone, but at 10 x 6.4 x 1.7cm there’s something just a little bit off about the DX50.

It’s too deep. That or it’s not tall enough. And it’s perhaps a fraction too wide.

At least the DX50’s aluminium-and-plastic body, at 146g, is a predictable (and happily, light) weight. And we all think we know what a touch-screen is like too – it’s as bright, clean, high-resolution and responsive as a smartphone’s screen.

But the DX50’s is a cramped (2.4in), low-res (320 x 240) portal to frustration – text is small, and touching the screen is a hit-and-miss exercise in terms of getting a response (unless you have fingers like cocktail sticks).

It makes us yearn for more than just three physical buttons.

Still, elsewhere the DX50 is nicely specified. A 3.5mm headphone output is joined by line-level and mini (3.5mm) coaxial output – this last one is useful if your front-room DAC is better than the DX50’s very acceptable Wolfson WM8740 24-bit chip.

There’s a microSD slot for expanding the iBasso’s pretty measly 8GB of onboard flash memory, and a ‘gain’ control to accommodate headphones of differing sensitivity (which gives three levels of output to complement the 256-step, yes 256, volume control).

Battery life is estimated at 14 hours, with a full charge taking three hours from the mains or double that via its micro-USB slot. DSD support is coming with an imminent (at the time of writing) firmware update.

And while the touch-screen is no one’s idea of sophistication, the GUI is at least straightforward.

Given every chance with a couple of 24-bit/192kHz files (Mozart’s Violin Concerto no. 4 in D major played by Marianne Thorsen and Daft Punk’s still-fresh Get Lucky), the DX50 does great work with the textures of instruments - be they virtuoso violin or earth-moving electric bass.

The soundstage that the iBasso establishes is admirably wide, and it has little problem describing instruments’ positions on the stage relative to each other.

It’s a generously detailed and unabashedly upfront listen, eager to get on the front foot and more than willing to attack a tune.

Information is plentiful, especially through the midrange when the strings really bite or Pharrell’s voice gets extra-seductive.

There’s solidity, good tonal variation and decent heft down in the low frequencies, and the top end attacks with just as much confidence as the rest of the frequency range.

The expansive proportions of the soundstage means there’s decent breathing-space around individual instruments and plenty of space in which a singer can operate. There’s a downside to this up-and-at-‘em attitude, though, and it centres on refinement (or the lack thereof).

Even the biggest, highest-resolution file sizes can veer uncomfortably towards coarseness, especially at the top of the frequency range where percussive sounds need little encouraging to harden up.

Dial in a little more volume and the suggestion of relentlessness becomes a definite trait, with consequent effects on organisation.

Listen to more ‘economical’ files (you may still be saving up for that 2TB microSD card and are stuck with the DX50’s 8GB for now) and the hardness, rather flat dynamics (it’s pretty much all turned up to ‘11’ from the get-go) and so-so organisation become the DX50’s overriding sonic signature.

A 256kbps file of The Hold Steady’s Sequestered In Memphis crashes and splashes through its 3m 33s as if there’s a prize for the instrument that finishes first.

Treat the DX50 to the sort of full-fat file-sizes it deserves and it’s an engagingly perky player.

It’s also a player that’s an unnecessary faff to operate, though, and one with a user interface that’s strongly at odds with the modernity of the digital music files it can handle.

We like it, but it’s not the best affordable portable hi-res player around.