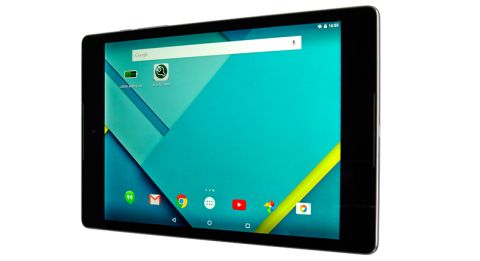 Android 5.0 Lollipop looks great on the Nexus 9, but it’s uncompetitive in most other areas at this price

The Google Nexus 9 feels like it’s having something of an identity crisis. At £320, it’s no longer the cheap tablet that the Nexus brand originally thrived as - but compare it with the premium tablet market it’s now up against and it struggles to compete. This Nexus has been a long time coming, and we’re not convinced it has been worth the wait.

In terms of size, it sits between its two predecessors – the excellent Nexus 7 and the not-quite-as-good Nexus 10, with a screen size of 8.9in. It feels like a ‘medium-sized’ tablet rather than large or small, a Goldilocks effect that many will feel is just right.

Its aspect ratio matches the iPad at 4:3, which is a rarity in a sea of 16:9 Android tablets, and a welcome introduction. While you will get some letterboxing when watching films, the rest of the time you’ll appreciate the extra screen width this ratio allows for when browsing or reading.

Despite this, when we first picked up the Nexus 9, we couldn’t help but be a little disappointed. Considering it’s been made by HTC, the brains behind the gorgeous HTC One (M8), it’s a shame it hasn’t pushed a more premium design here too – particularly given its price.

At 8mm thick, it feels a little on the chunky side, by today’s standards at least, and while its plastic body feels sturdy enough to survive day-to-day use, there is some flex to it - particularly towards the top edge.

It’s the little things too, like the metal rim that forms a perimeter around the edge of the tablet – it pokes just that little bit too much above the screen, making it rather rough to the touch. Maybe we’re nitpicking, but things like this suggest a lack of attention to detail compared to rivals.

Its plastic shell does help make it easy to grip though; particularly handy considering it’s fairly heavy for its size at 425g – just 12g less than the 9.7in iPad Air 2.

This is still an easily portable weight, but the same-sized Kindle Fire HDX 8.9 weighs in at a much lighter 374g, and you will notice the extra weight when using it one-handed for extended periods.

Buttons are kept to a minimum on the Nexus 9, with just a volume rocker and power button on the right hand side. We’d like them to be a little more pronounced for easier use, as they can be hard to differentiate between when just blindly running your finger along the edge.

Lastly, you’ll want to be careful with fingerprints and grubby marks on that back panel too – the Nexus 9 collects the lot, and our white review sample needed a good wipe down regularly to keep it looking its best.

With its £320 price tag, the Nexus 9 is a lot pricier than many were hoping for, but it does come with a suitably boosted spec list to back it up.

Its chipset moves away from the standard Qualcomm Snapdragon set-up we see in most Android tablets and instead goes for an Nvidia Tegra K1, a 2.3GHz dual-core processor with 64-bit architecture supported by 2GB RAM.

Don’t let its dual-core credentials put you off, it’s every bit as powerful as its quad-core competition, and we found performance to be smooth and largely stutter free.

We pick up the very occasional stumble or delay when heavy multi-tasking, but we’re putting this down to preliminary bugs in the new Android operating system that appears on the Nexus 9 (and the Nexus 6).

That operating system is Android Lollipop, or Android 5.0 to give it its official title, and it’s not an insignificant upgrade - particularly in the way it looks.

It feels like a similar move to the one iOS took when shifting from iOS 6 to iOS7, in that icons are bolder, brighter and flatter. Folders now appear as round circles, most of Google’s own apps have been updated and improved and the soft keys for navigation have been given a modernised, pared down look too.

There are new animations for opening menus, which are subtle but nice to see once you notice them, and a new white background to the app tray. It gives the feeling that all of your apps and processes are simply layered on top of one another, rather than new screen after new screen.

What else is new? Recent apps now appear in a rolodex style graphic called ‘Overview’, giving you bigger previews of the apps and screens open, notifications appear on, and are actionable through, the lock-screen (though this is completely customisable on an app-by-app basis).

There’s also a new ‘Priority Mode’, which is Google’s own ‘Do Not Disturb’ setting. You can set it for a certain amount of time, from minutes to days, and it will allow only people and apps on your ‘Priority’ list bother you with notifications or messages. Alternatively you can select no one at all, and keep all notifications at bay.

One of the nicest additions of Android Lollipop is the implementation of different user accounts, allowing different people using the same tablet to have their own layouts, settings, photos and apps, accessible from the lock-screen.

There is also a guest mode for people who don’t use the tablet enough to have their own profile. This provides them with a fresh slate with none of your information stored, and once they sign out of guest mode, any accounts they’ve logged in to will be automatically logged out, and any changes they’ve made will be wiped.

The pure Android experience has always been the best way to experience Android without question, and the Lollipop update only makes this better.

It’s an experience that will of course come to other Android tablets, the only question is when – if you want the best Android experience right now, the Nexus 9 is the only tablet where you can get it.

When it comes to its screen, the Nexus 9 packs the same 2048 x 1536 resolution as the iPad mini 3, and even manages to pack in a few more pixels-per-inch too, at 281ppi vs 264ppic compared with its smaller competitor.

It’s promising on paper, but these specs don’t tell the full story.

When compared with the iPad mini 3 running a full HD clip, the overall picture looks a little soft, and isn’t as capable of portraying the fine detail that helps bring out textures, shapes and a sense of depth in landscapes, for example.

Blacks can’t go as deep as the likes of the iPad mini 3 and Samsung Galaxy Tab S, but it does do a good job with keeping whites pure and bright, even if they do have a tendency to be a little glary and lacking in detail.

Colour balance is largely accurate, with skin tones well judged and no colours overdone. It’s a passable performance, but we’d like more detail in the images to really make this a screen to be reckoned with.

In our review sample we also noticed some backlight leaking along the top edge (when in portrait mode). It’s not too distracting in use, but it’s worth looking out for all the same.

The music performance on the Nexus 9 is pretty disappointing to say the least and while most of its competitors have shown improvements in this area, this Nexus has taken a rather large step backwards.

For a start, its tonal balance is overly bright and sounds particularly hard in the top end, even with the CD quality rips we tested with.

It also lacks organisation, and even something like a fast-paced guitar riff is enough to throw the whole presentation off, sounding muddled and undefined. Rhythmically, it needs a lot of work.

But it’s not just that. Instruments lack the depth and texture you’ll find in the fine detail of the Sony Xperia Z3 Tablet Compact, and vocals lack subtlety, so nuances are lost. Dynamically it feels squashed too, unable to provide the space that allows a track to build and fade as is required.

Without headphones, the Nexus 9 provides ‘Boomsound’ front-facing speakers, courtesy of HTC, which are placed at either edge of the tablet (when being used in landscape mode) and around midway up so they avoid ever being covered by your hands.

While we liked the ‘Boomsound’ speakers featured on the HTC One (M8), they’re implementation here is not quite as successful. They’re direct, relatively immersive and will go loud, but the result is not one you’d want to listen to at length.

It lacks clarity, with bassy soundtracks at risk of sounding distorted at volume and a treble that is a touch unrefined too. We’d recommend using headphones for the majority of uses.

When it comes to battery life, the Nexus 9 does redeem itself somewhat, with its 6700mAh battery offering very close to its advertised 9.5 hours of multimedia usage and offering 11 hours and 47 minutes in our battery rundown test, looping a 720p video at half brightness.

Even better, Android Lollipop now comes with a battery saver mode built in, which you can set to kick in automatically at 15 per cent. This will do things such as limit background data and vibrations to help your tablet last as long as possible. To keep things equal, this was turned off for the rundown test.

We never get too embroiled in the quality of cameras on tablets, simply because we’re still not sold on their form factor being in anyway suitable for serious photography. But if we did, we’d certainly be looking elsewhere than the Nexus.

It simply doesn’t deliver pictures that you would expect from an 8MP camera – it’s not even able to really nail a decent shot in good light, and auto-focus is both slow and unreliable.

Shots are either washed out, with colours lacking any real punch or vibrancy, or over-exposed, not helped by the camera’s lack of exposure controls. There’s not even an HDR mode for improving the detail of pictures in direct sunlight.

A stripped back photo app isn’t always a bad thing, but only when the camera on-board can perform a decent job when it comes to simple pointing-and-shooting. That simply isn’t the case on the Nexus 9.

One final niggle for the Nexus 9 is its lack of storage options. It’s not expandable, which feels unusual for an Android tablet at this price, and is only available in fairly limited 16GB or 32GB options.

Of course, the iPad mini 3 offers a similarly closed off approach to storage, but with the option to at least go up to 128GB should you need to, with the 64GB iPad mini 3 the same price as the 32GB Nexus 9 (£400).

All this comes together to leave us feeling rather underwhelmed by the Nexus 9. Its screen size might be appealing for its mid-size approach, and its inclusion of Lollipop will be a draw for pure Android fans. But when it comes to performance, the Nexus 9 simply can’t compete with the best at this price.

Its smaller sibling may once have been the undisputed king of the affordable tablet market, but the Nexus 9 hasn’t been able to make the step up to this level quite so smoothly and is outclassed in almost every area by not just one, but a number of competitors. We’d hoped for much, much more.