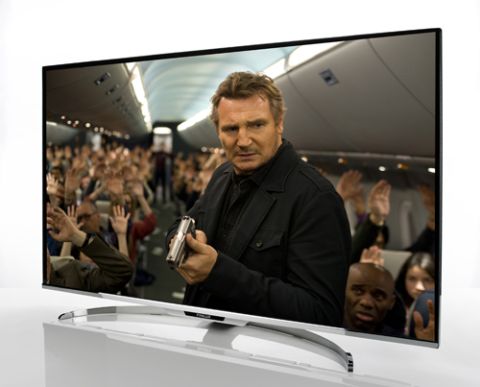 A good-looking set, but doesn’t deliver a competitive performance

The unassuming sets constantly impressed us with great screens for great prices, and we’re hoping this new Finlux 55F9076-T has more surprises in store.

One look at the 55F9076-T, and it seems Finlux wants to up its game this year with a sleek and smart finish.

The bezel surrounding the large 55in LED-backlight LCD screen is sliver-thin, and the curved metal stand with its ‘chrome’ finish is shiny. It looks good.

The set does wobble a little bit on its stand, but it’s well built otherwise. Just make sure that the curved stand will fit on your TV rack beforehand.

Clear and bright with a decent amount of detail, the 9076-T performs fairly well with broadcast channels.

Brightly-lit daytime shows, such as Homes Under the Hammer or This Morning (we’re spoilt for choice on Freeview HD) benefit from the Finlux’s clean and stark whites.

But the blacks never quite go as deep as they need to, which can be problematic if you’re watching glossy Marvel films on Blu-ray.

As the title suggests, Thor: The Dark World has plenty of dark scenes that demand a set with strong contrast, and the Finlux’s washed out blacks rob the picture of punch and excitement.

Thor’s red cape looks muted. when it should be vibrant, there isn’t enough detail to flesh out skin tones or the texture of hair, and the picture feels somewhat flat.

Setting the backlight level to medium is one way to make the blacks go deeper, although you will be sacrificing some of the brightness.

It hasn’t got particularly strong viewing angles, either, and anyone sitting at an angle may find colours and blacks fading somewhat.

Play the 3D Blu-ray of Life of Pi, and the Finlux’s passive 3D performance has decent depth and is gentle on the eyes – Finlux include a generous eight pairs of passive glasses with the TV, too.

Voices and dialogue are fine, as the 9076-T pushes the midrange forward quite a bit.

It’s not quite as detailed or solid as we’d like, and has the effect of leaving the rest of the sound thin.

There’s not enough detail and weight to hold it together, so you’re left with half-hearted roars of engines (when watching Top Gear), explosions that don’t quite have an impact (Star Trek) and soundtracks with little subtlety (Life of Pi).

On the bright side, there’s no harshness to the sound.

The 9076-T doesn’t have a huge collection of smart apps, but it does have the essentials in BBC iPlayer, Netflix and YouTube.

There are also a couple of surprises such as Blinkbox and TuneIn Radio, which will give you access to plenty of on-demand shows and free music, respectively.

The apps are quick to launch and streaming MasterChef on iPlayer was stable, even on our crowded office network.

You also get the trio of social networking apps: Twitter, Facebook and Skype (for which you’ll need to buy an extra camera).

There’s something very practical and no-nonsense about the Finlux, with its gold and black themed basic menus and smart features all on one page. But it does look rather dated somewhat.

We have issues with the new remote control. Last year, Finlux’s remotes were simple and easy to use with a flat design.

This year it is a concave design, which makes it rather odd to use. Our fingers kept slipping off the domed buttons, and we were always worried we’d accidentally hit the volume and channel buttons by mistake.

It is fairly responsive, although it’s not wholly intuitive to use.

Around the back you’ll find four HDMI inputs and two USB ports (one of which supports HDD recording), and analogue connections such as component, composite and scart inputs.

A digital optical output is available, as is a Freeview HD tuner.

You can connect to your home network using the ethernet port, although Finlux does include a separate wi-fi dongle in case you want to go wireless.

The set is DLNA-compatible, too, which means you can stream content from any DLNA-compatible devices (laptop, NAS device, smartphones) to the screen.

We’re disappointed with this Finlux. Our expectations may have been high after last year’s bunch of great sets, but the 9076-T’s issues with black depth, its lack of crisp detail and that frustrating remote is at odds with its original £1200 price tag.

A 55in screen for £900 may sound tempting, but we’d opt for a TV that delivers a more satisfying performance, regardless of price or screen size.

We hope Finlux has more in store for us later in the year, but if you’re after a new 55in set, for now, we’d look elsewhere.