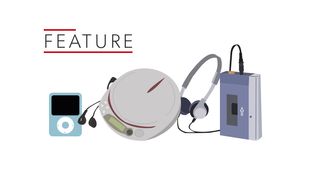 These days, size is one of the most crucial factors when it comes to choosing a portable player. It has to be able to cram in thousands of media files, while also fitting in your pocket and weighing no more than a feather or two. Oh, and we demand the best possible sound quality, naturally.

But casting our minds back to the very first What Hi-Fi? Awards in 1983, and things were very different. For a start, Personal and Portables were deemed worthy of their own categories.

The "excellent and versatile" Akai PM-R2 radio cassette player - costing £80 - was crowned Personal of the Year, while the Marantz Superscope, a boombox which included a mini recording studio, was the best Portable.

As you'll see, there has been some evolution in the 'portable' player...

MORE: What Hi-Fi? Awards - the tech that got left behind

The early portable running was made by the personal tape-playing stereo and the larger boombox-style unit, however, the CD started to make its presence felt in the latter half of the 1980s.

The Sony D100 was named CD personal of 1987, part of the wider revolution following the launch of the first compact disc players in 1983.

The end of the boombox?

From the 1989 Award-winning Panasonic RX-DS30 - a CD portable packed with features, such as its XBS bass boost system - to the 1990 Award-winning Sharp CD75E, the idea of what made a top portable appeared to alter dramatically.

On the Sharp, we noted that: "[It] succeeds because it effectively bridges the gap between 'music on the move' and hi-fi at home".

However, it now seems inconceivable that the Sharp would fit in with the definition of 'portable'. Did the market agree back in the early 1990s? Perhaps - there wasn't a 'Portable' category in the What Hi-Fi? Awards 1991...

It looks like the 'portable' or 'personal' player went on a hiatus during the mid-1990s and it wasn't until 1998 that a mobile music maker took home an Award again.

Popping up in the Accessories category of all places, was the Sharp MD-MS702H - an indication that the era of the MiniDisc had begun.

With the new millennium came the rise of the MP3. The Creative Labs D.A.P. Jukebox, one of the first MP3 players we reviewed, took full advantage with its Awards success in 2001.

"Imagine a jukebox able to carry 150 albums", we said. "Now imagine you can stick it in your pocket..." Clearly, 150 albums seemed a lot back then.

And Creative had a good run in this category. The following year saw the Creative Jukebox 3 take home the honours. But again in the Accessories category...

The alarm bells were ringing for MiniDisc (2002) and personal CD players (2003); the former unable to see off competition from the CD when it came to a home hi-fi system. It's a shame, because MiniDisc worked just great as a portable device.

The demise of the personal CD player, however, was more indicative of the format's increasing struggles against digital sources.

But what did that mean for portables?

The What Hi-Fi? Awards in 2003 saw the introduction of a new portable product that would remain commonplace in the years that followed.

An unassuming device from a rather modest US tech manufacturer: the Apple iPod. And it was also the year that the term 'portable' started to reappear in the pages of our Awards issue.

One year on from the iPod's debut at the What Hi-Fi? Awards, there were a whole host of portable products recognised as the 'Portable' category made a strong return.

A jukebox, radio, iPod (obviously) and even a CD player walked off with Awards from this category, as we said "taking your music with you has never been easier".

Three iPods, a Nokia smartphone and the Sony PSP - "pocket-sized paragons" that let you enjoy your music and video on the move.

The digital revolution was in full swing when it came to portable players, with one particular product beginning to make its presence truly felt...

Hanging on the telephone

A tablet, phone, camera and music player all in one... for many, the smartphone has replaced the need for any separate portable music player.

Thankfully their music and video capabilities have vastly improved, thanks to Full HD, 4K and OLED screens and HDR and hi-res audio support. 2013's winner, the iPhone 5S was our first smartphone Award-winner, followed by the iPhone 6 in 2014.

MORE: Best smartphones to buy in 2017

The launch of the iPhone 6 in September 2014 coincided with the demise of the iPod Classic. The chunky portable music player was killed off and many feared this could be the beginning of the end for these specialist players.

But, rather than a final nail in the coffin, the portable music player has made a comeback, with a number of Award-winning players arriving on the scene.

Astell & Kern has fared particularly well, with the AK Jr picking up the company's first Award in 2015, followed by its sibling, the AK70, winning a second 12 months later.

The future for portables

So, where is the portable player taking us next? We started out big, then scaled down in size to the Ultra Portables and MiniDisc, before expanding again with smartphones and dedicated players.

Will we continue down this road as the appeal of high-resolution music grows? Can dedicated players and smartphones coexist? Or could we see wearable tech take over our listening and viewing habits in the years to come?

The smartphone seems to have cemented its position as the video player of choice for now, with dedicated players concentrating purely on music duties.

Our list of 2017 Award-winners includes one smartphone, but also a trio of dedicated portable players in their own dedicated category: the Cowon Plenue D, Astell & Kern AK70 MKII and the Astell & Kern Kann.

So, at the moment it seems there's room for everyone – but who knows what the next 12 months will bring?

MORE: All the winners from the What Hi-Fi? Awards 2017