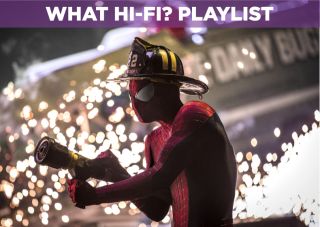 We gave the first film a positive review but it displayed some narrative troubles, problems the sequel has not resolved entirely. But we’re quite happy to say that The Amazing Spider-Man 2 is a much more confident and spectacular entry in the series.

To sum-up the film in a word, it would be 'busy'. Catching up with Andrew Garfield's Peter Parker on the eve of graduation, he's still trying to mix his personal life with his responsibilities as Spider-Man, a constant tug of war that’s reflected in his on-off relationship with girlfriend Gwen Stacy (Emma Stone).

That's not all though. A childhood friend comes back in the form of Dane DeHaan's Harry Osborn as he visits his father Norman (Chris Cooper) who is on his deathbed suffering from a debilitating disease.

Jamie Foxx's Max Dillon completes the main cast as a lowly, put-upon employee at Oscorp, involved in an accident that turns him into Electro, a super villain who can manipulate electricity and who is out for revenge.

We're all for ambitious films but you can try and do too much. The sequel spins a multitude of narratives, a problem with the first film that’s not been rectified here.

Juggling so many stories means that the dense narrative is stretched thin and while the film is never confusing (and never less than entertaining), returning director Marc Webb and screenwriters Alex Kurtzman and Roberto Orci feel the need to tell several stories simultaneously, disrupting the balance of the film as a whole.

Despite that, the strongest element is still the relationship between Garfield’s Parker and Stone’s Stacy, which sparkles yet again.

It gives the film a solid backbone as Peter struggles to keep the promise he made to Gwen’s father (Dennis Leary, appearing as a ghostly apparition), with Gwen looking to move on with her life if he’s not willing commit. Their relationship is compelling, and at its most interesting point in the trilogy in this film.

The villains fare less well with DeHaan’s Harry Osborn feeling a little shooed-in and not given enough time to make his turn from long lost friend of Peter’s to diabolical foe feel really satisfying.

There’s less depth (purposefully, we might add) to Foxx’s Max Dillon/Electro who despite featuring prominently in the marketing is more the secondary villain.

Foxx's Dillon is fun to watch, delusional before he gets his powers and the vehicle for quite a bit of humour. In fact, this film is much funnier than we expected. No bad thing, naturally.

From Spidey’s quips (“you want me to come down there so you can kill me?”), to some incredibly wacky moments that veer close to camp (Martin Csorkas’s German doctor is a real curio), it’s been a while since we’ve laughed at a comic-book film this much.

Visually it's spectacular, with bright colours dominating the visuals and the CGI effects feeling a lot better integrated than before. Considering the pace of some of the action, we were quite impressed with the motion handling.

We also saw a 4K version of the film with our Reviews Editor Andy Madden part of a select group of press members that Sony took to a special screening at the Everyman Cinema on London's Baker Street.

Seeing the movie in Ultra HD, we were blown away by the picture. The detail and texture of Spidey's suit looked so real, you were fully expecting him to fling himself into the front row. The slow-motion scenes gave us ample time to be wowed by the extra resolution.

It's fair to say the movie passed, quite literally, with flying colours.

From a sound perspective the film is excellent too with special mention going to Hans Zimmer and his group of collaborators for delivering a score that feels like an extra character in the film (as if it needed any more).

It’s an eclectic, diverse and propulsive score that gives the film a grand soundstage to flex its muscles on. Electro’s theme, with its dubstep stylings and whispered chanting, really makes its presence felt in the Times Square sequence that should be an excellent work-out for any home cinema system.

We were hoping for an improvement and this sequel delivers on that. It's still something of a disappointment that it can't reconcile it's more ambition with some disciplined storytelling but we largely enjoyed it nonetheless.

The action is better, much more fluid and dramatic now there's more at stake, something that's brought home in an excellent climax. While the villains lack some depth, they're engaging enough to watch.

We're inclined to give this four stars but can't quite convince ourselves despite the film's positive attributes. So it's a high three stars then for The Amazing Spider-Man 2.