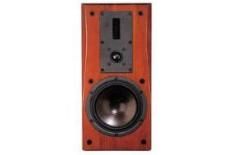 These Dalis make a great long-term choice. Make sure the bass doesn’t bother you before you buy, though

Sometimes one tweeter isn't enough. Dali is fond of using a twinned arrangement for high frequencies – in this case combining a 25mm soft-dome with a 10mm x 55mm ribbon – and it works well. The company claims this configuration produces insightful treble with wide dispersion, and we wouldn't argue.

The '300s deliver a sweet and clear sound coupled to a wide, open soundstage. Fire the speakers straight ahead, as Dali intends, and you'll be greeted with the kind of image precision even the likes of B&W's excellent 805Ss would have trouble bettering.

Warm and musical
Treble isn't the only thing these Dalis do well. Voices are full-bodied and articulate, so if you're a fan of the likes of Kate Bush or Nina Simone, you're in for a treat. The Helicons are musical; too: they don't throw detail at you, instead concentrating on delivering a rich musical experience, and if that means tonal neutrality is sacrificed – the 300s err on the warmish side – then so be it.

It's a largely successful approach. The Helicons are informative and fast, they time well and don't lack for scale, either. They have a shade too much character to analyse recordings as well as the best, but that's nit-picking.

However, while the Dalis' low-end delivery is deep and powerful, it lacks definition, sounding blurred compared with the well-defined higher frequencies. This shortcoming doesn't spoil the overall musical experience, but it does cost these likeable speakers a star.