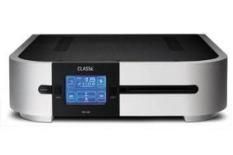 We have to say that reviewing Classé kit is usually a pleasure. While not always the best-performing components around, every product we've tested oozes an air of, well, class, that rivals struggle to match. The CDP-102 is a great example of this.

It's such an elegant piece of design: a touchscreen replaces the clutter of facia-mounted buttons and a slot-loading mechanism gets rid of the nasty plastic drawer.

Much high-end kit revels in looking industrial (it always has), but we think customers have moved on and expect more thoughtful design for their money – and in our book, Classé leads the way.

Common touches add to the class
All the company's disc players are built around the same foundation – the casework, touchscreen and transport are common. The differences lie in the sophistication of the audio and video boards.

Classé's CDP-102 is the entry point into the range, and is presented as a CD player first and foremost, despite also being able to play DVD movies and DVD-Audio music discs. This is emphasised by the fact that the player only has S-Video and composite video outputs, and only plays stereo sound from multichannel DVD-Audio discs.

Play Kanye West's latest CD, Graduation, and you'll find the CDP-102 a charming listen. Like other Classé kit we've heard, this CD player puts a great deal of emphasis on refinement, so don't expect it to grab your attention on a short listen. Such qualities rarely impress during a quick a demo, but they're exactly the traits that keep a piece of kit satisfying over months and years.

The CDP-102 also adds strong dynamics and decent timing into the mix. Classé equipment tends to have a rich tonal balance, where the bass and mids are more fleshed out than most rivals manage.

This player is no exception. If properly judged, such a presentation makes poorly produced discs – normally bright and forward – sound more palatable, while adding authority to better recordings, with no loss of life or sparkle. Shostakovich's String Quartet No8 is a dark, stirring and wonderful piece of music, and the Classé conveys every sliver of emotion with ease.

DVD-Audio, but only in stereo
The sound is even more impressive with DVD-Audio. We tried a range of discs from the early eighties hip-hop of Grandmaster Flash to Beethoven's Seventh Symphony, and the CDP-102 responds with improved transparency and insight.

Despite limiting the results to stereo, a machine like this reminds us what a shame it was that high-resolution audio formats such as DVD-Audio and SACD never took off in any kind of mass-market way.

The CDP-102 might be Classé's entry-level machine, but it's no poor relation to anything.