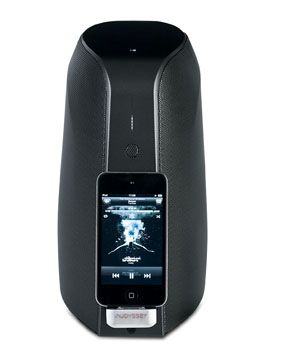 A worthy addition to the dock world, not least for its versatility and wireless Bluetooth connectivity

It takes a bit of thought to stand out from the crowd in the iPod dock market. One way is to come up with an weird name: the South of Market Audio Dock ticks that box.

Arguably a better way is to deliver great features and performance. Audyssey might have hit the mark there, too.

And yes, this is the same Audyssey that plenty of you will know as the company behind the equalisation software found on many AV amps. This is the company’s first attempt at an iPod/iPhone dock.

Bluetooth is its ace in the hole
Yes, this is an iPod dock, but one that does a decent job of setting itself apart. The price helps, but so does the design – part imperial stormtrooper helmet, part futuristic kettle – and the integrated Bluetooth tech.

As well as charging and playing any docked Apple portable, it can also stream music wirelessly from any Bluetooth-enabled device, act as a hands-free speaker for voice calls, function as a speaker system via the 3.5mm input, and sync to iTunes via USB.

There’s a dinky remote and free app for fine-tuning the equalisation, too.

It looks the part, feels solidly built and, crucially, sounds pretty good, too. It goes loud without brightening up, packs plenty of punch and weight and delivers a sound with impressive scale.

Arguably there’s a little too much boom to bass at times and rivals deliver a bit more insight and organisation, but with the bonus of wireless streaming – albeit with a little drop in quality – this remains one for the shortlist.