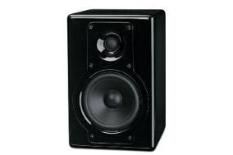 The price is right – and the size is too. But if your priority is outright fidelity, there are compelling alternatives

If the only prerequisite for desktop speakers were size, then the Audioengine A2s could confidently look forward to retaining their 2008 What Hi-Fi? Sound and Vision Award as Best Budget Desktop Speakers.

Before we get to the vexatious subject of performance, though, let's consider the A2s' composition.

The right-hand speaker has the usual speaker-cable binding-posts around the back. The left-hand speaker has a fair bit more going on. It houses two times 15W of amplification, a pair of RCA inputs, a 3.5mm input, speaker-post outputs to its passive right-hand partner and a volume control.

The A2s are supplied with a 3.5mm-3.5mm interconnect to join your MP3 player of choice, via its headphone socket, to the left-hand speaker – which means that there's no battery charging capability for your player.

Great drive, but a shortage of scale
Playing a lossless file of Beastie Boys' Shake Your Rump, the most immediately impressive thing about the A2s is the frankly unlikely degree of drive they bring to the recording.

The little speakers get stuck right in, pounding through the tune with determination and summoning quite startling low-end attack.

This terrier-like enthusiasm isn't at the expense of detail, which is plentiful, or articulacy – the Audioengines certainly aren't short of midrange eloquence.

There's a hint of coarseness around the upper midrange, though, which becomes more evident with a switch to a 128kbps, iTunes-derived copy of Can's Turtles Have Short Legs.

There's also a shortage of outright scale revealed, which is scarcely surprising when you consider the A2s' diminutive size.

Positioned on a desktop, as every pair of A2s is sure to be, the Audioengines focus reasonably well - but they're more sensitive to positioning than is ideal for a product of this type.

“Not much to complain about,” we said of the A2s back in April 2008. And that's still the case – there's certainly a lot of fun to be had alarming people with the volume these tiny speakers can summon.

But where outright fidelity is concerned, we now think you can do better.