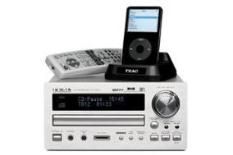 Good at what it should be, until rhythms start to drive

If you're familiar with the TEAC CR-H255, you might recognise this micro receiver. Then again, if you've seen any micro recently, it'll probably look all too predictable – indeed, up against the Award-winning Onkyo CS-515UK, these are peas in a pod.

Similar in spec to the CR-H255, the key difference here is the bundling of an iPod dock. This connects to the front of the system, and replaces the USB input found on its same-price sibling.

iPod-friendly design
Aside from the iPod dock, there's also CD and DAB/AM/FM functionality. All three can be controlled via the remote, including full menu access to your iPod. Despite cramming all this on, the remote is intuitively laid out and simple to get to grips with.

There are no speakers supplied, so we chose to review them with the £100 Q Acoustics 1010 speakers, which are a suitable match. Tannoy's Award-winning F1 Customs would be an excellent choice too (£110).

Doesn't drive like it should
Sonically, the system has plenty going for it, even though it just falls short of the class-leading Onkyo, to which you could add that company's DS-A2 dock to make them a similar price.

What the TEAC does well is detail, natural vocals, and good separation to sounds. It's a similar story via the iPod dock, which sounds pleasingly detailed. Only something really driving, such as the Chemical Brothers Block Rockin' Beats, reveals that the TEAC can't quite match the Award-winner for excitement and timing. It's not far behind the Onkyo, but that's where it is.