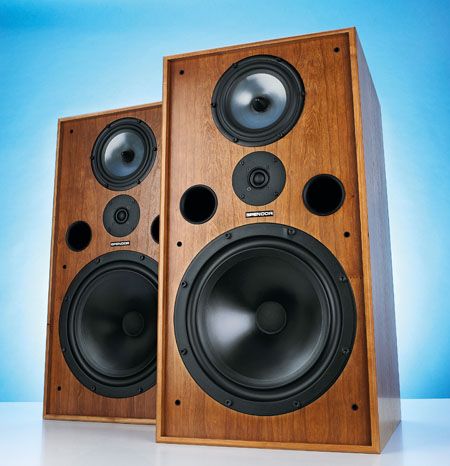 It’s no surprise that the Spendor SP100R2 looks like a throwback to speakers past. It is. It’s the largest speaker in the company’s Classic range and can trace its lineage back to the Spendor BC3, first launched in 1973.

But while the engineering principles go back decades, the R2 brings in much of the knowledge gained by developing modern Spendors such as the ST1 and SA1. It’s a classic design engineered to modern standards and sensibilities.

One thing that can’t be called modern is the SP100R2s’ appearance. These are big, chunky speakers – about the size of a small beer fridge – and proud of it.

Most high-end speakers have 16.5cm bass drivers, so it comes as something
of a shock to see an old-fashioned 12in unit – that’s around 30cm in new money. This massive driver and cabinet suggest oodles of bass – and that’s what you get.

Heavily damped cabinets
Apart from the proportions and large bass driver it’s the cabinet that flies most in the face of current thinking. Unlike just about every rival, the SP100R2s’ cabinets are thin-walled and heavily damped.

Tap a panel and you’ll hear a low, controlled thud. This kind of construction takes cabinet resonances lower in frequency than the ultra-rigid approach used in modern alternatives.

Playing a favourite of ours – the Dark Knight OST – results in a sea of lows delivered with rare depth, weight and subtlety. Very large drivers produce bass in an alluring way that smaller units can’t match (even in numbers) – so the SP100R2 doesn’t smack you in the chest. Instead the lows flow, swelling as the music demands, while agility and definition are still crisp.

Move upward in frequency and it’s all good news. The new in-house midrange unit along with the 22mm surround tweeter combine to deliver a lovely, natural presentation.

Fluid, entertaining and informative
The SP100R2 manages to sound fluid, informative and entertaining without edginess, even with poor recordings. There’s enough transparency to expose ropey material, but the Spendors still manage detail with an unusual amount of politeness.

Volume, unsurprisingly, is no problem for these speakers: they have the ability to fill a large room without straining. Large-scale dynamics are handled with grace, and stereo imaging is nice and expansive, if lacking the out-of-the box projection of smaller, more modern rivals.

Perhaps the SP100R2s’ biggest strength is that they’re easy to listen to for hours without getting tiring. Their ability to reveal and entertain while remaining undemanding is a rare one.

Designed for larger rooms
These are large speakers so an appropriately sized room is mandatory if that lush bass isn’t going to dominate. Take care with positioning. We found away from walls with a touch of toe-in worked well in our room.

Stands should put the tweeter near ear height; deviate too far and the tonal balance goes amiss.

Get it right and these are true gentle giants. They do everything you’d hope for in a speaker, but with a grace that their appearance doesn’t hint at. The SP100R2s show that past engineering solutions still have plenty of merit.