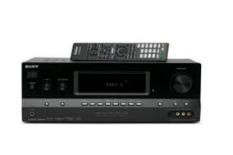 Its price-tag may befit a budget product, but the STR-DH800 isn't the amp that Sony forgot.

The 'DH800 keeps it simple. At this price, it's no surprise to find that luxuries such as video upconversion or upscaling don't feature, but standard prerequisites are in place, including four HDMI inputs and an accurate auto-calibration system.

More importantly, this receiver will decode all the current HD audio formats.

Straight out the box, the Sony has a rather cold, aggressive sonic style. But, after a day or two operating at full steam, it eases up.

During Knowing, as the airliner crashes, the Sony delivers power and drama, along with a cohesive sound stage.

Shop around online and you'll find some retailers are already shipping the STR-DH800 for £20-£30 less than the price quoted here. For AV enthusiasts on a tight budget, this is a steal.