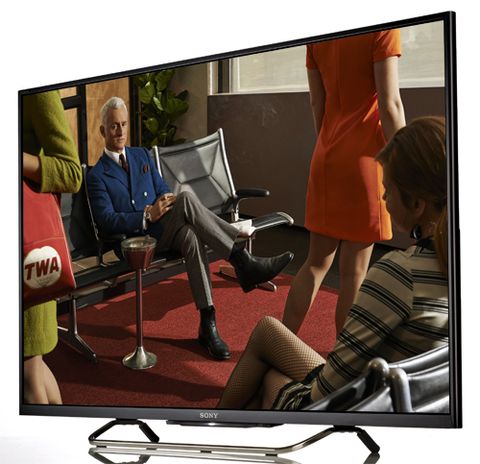 A promising start for Sony’s 2014 Full HD range, this TV performs well in many areas

We’ve seen big TV after big TV this year, but the KDL-42W705B is one of the first md-size screens to pass through our test rooms.

It’s the 42in from Sony’s third-tier W7 Series – also comprising 32in and 50in models – in Sony’s 2014 Full HD line-up. Of course, the company’s headline ranges are flying the flag for 4K, as expected.

Sony’s 2013 LCD sets were good, and the 42W7 picks up where it left off. If your heart is set on this size, it might be just the ticket.

We’re impressed from the outset. Lift the telly out of its box and it’s instantly clear that Sony has slimmed down this year – this is a slender set that is almost all screen, making it look significantly smaller next to last year’s Award-winning 42in Panasonic telly.

This may be one of Sony’s more budget entries, but it doesn’t skimp on design. Its thin, shiny aluminium frame is nicely curved at the sides and smooth to touch.

The ‘Sony’ badge takes centre stage below the screen and shines from the glow of the power-panel-light beneath.

Despite the barely-there bezels, there’s still a choice of colour finishes: black – at the £530 base price – and silver, which attracts a £20 premium.

Sony has tweaked its Triluminous colour processing from last year’s models in response to criticisms of some overcooked colour performance (especially with blues) – and the adjustments have paid off.

The Sony set has a good colour palette, with rich – but still convincing – tones across the board (including blues).

Load a Blu-ray of Oscar-winning 12 Years A Slave and green fields are lush, but not overblown. Colours aren’t as vivid as on some TVs we’ve seen, but we like its natural balance.

The 42W7 might not be the last word in sharpness, but we like its mostly detailed picture. There’s texture to clothes and insight into anguished expressions and creased, worn faces.

There’s a good sense of depth to acres of cornfields and long, narrow streets too.

Contrast-wise, we’re taken aback with its impressively deep, oily blacks. Whites could be a touch improved, however. They are clean, but Solomon’s white-linen shirt looks punchier on rival sets.

Its only real problem is the lack of detail and clarity in dark scenes: clouds are sometimes underplayed in night scenes and faces are often overcome by shadow in dimly lit slave chambers.

It’s a talented upscaler too, delivering a sharp and clean picture with standard definition content. There’s not that usual big jump in quality when switching to its HD channels.

Put on a Star Trek Into Darkness DVD and colours remain rich, and skin tones realistic. Spock’s hair is jet black but, again, dark detail is its downside. You can’t make out the strands of hair and dark backgrounds aren’t as clear either.

If we had a pound every time a TV is let down by poor sound quality, we’d be pretty well off – and the Sony would only add to the money pot.

Its thin sound through its Clear Phase speakers has an inescapably bright edge to it and lacks weight behind dialogue. In 12 Years, wood chopping sounds hard, and cries piercing and sibilant.

We’d encourage fiddling with sound modes (there are six), as the out-of-the-box ‘Standard’ setting isn’t preferable. ‘Cinema’ is more spacious, and ‘Music’ takes that edge off treble, delivering a more balanced presentation.

We favour both, though ‘Sports’, ‘Game’ and ‘Compressed Audio’ modes offer further room for experimentation. Ultimately, we’d hand sound duties over to a soundbar like the Cambridge Audio Minx TV (£200) for more density and detail.

The TV rests on a well-made single bar stand which doubles as a wall-mount bracket too.

Despite its skeletal look, it’s a sturdy design and its central positioning is a practical bonus for those with a stand narrower than the TV itself.

Though the top half of the back panel is flat – making the TV no deeper than a finger-width – the bottom half is relatively bulky, and is where you will find the connections.

A hitch with some of Sony’s models last year (namely the 32W653A) was the ungenerous two HDMI and one USB inputs, so thankfully connections are twice many here.

With four HDMI and two USB inputs joined by a scart, composite and component, this is a well-equipped set. As outputs go, there’s an optical and headphone.

Despite its omission of 3D, we don’t feel it’s too short on features.

There’s a generous assortment of internet apps onboard, including the big players like Netflix, BBC iPlayer and YouTube; 5 On Demand, Amazon Instant Video and Flixster are also worthy pre-loaded services, though ITV Player and 4oD are not here (for now, anyway).

The TV’s built-in wi-fi means it can be connected to the internet wirelessly, but we’d always recommend a wired connection for more stability.

Social Viewing is another fancy addition to this year’s sets, and activates a ticker tape of tweets related to what you’re watching or with any chosen keyword at the bottom of the screen; it works well.

Elsewhere, Screen Mirroring can beam your smartphone content onto the TV screen, and DLNA support gives you access to media files over your home network.

It’s also Skype-ready, though you will need to buy a cam to use it for video calls.

Sony has done away with the side-scrolling Xross Media Bar interface for a more inviting, intuitive grid-based one.

The home screen is a gateway to its online and offline content: channel listings, apps, network storage, and Sony’s Music and Video Unlimited pay-per-view streaming service.

The latter has a decent catalogue – a good mix of new releases and old-time classics – and allows you to preview a 30-second clip of a movie or song before you buy.

Navigating the tabs at the top of the screen requires a sharp eye due to their small icons, but we like the overall layout.

The app panel has neatly scrolling pages and menus are foolproof. It’s quick on its feet to respond to controls, too.

Loading the home screen takes a second or two, although it can often be bypassed thanks to numerous shortcuts on the supplied remote control. Keys for Netflix and the app page, Football and Social Viewing modes soon became second nature to use.

The remote is tall and slim with a rounded, speckled back and well-arranged buttons. Our only qualm is the small, indistinct button to load the EPG.

Sony’s TV SideView remote app is also compatible with this year’s models, and is a useful alternative.

As well as basic volume and channel-changing functions, you can view information about programmes and view the week-long-forecast EPG on the mobile screens so it doesn’t distract TV viewing; set a timer to record programmes to an attached USB HD; and switch sources and load apps.

It’s receptive and nice to use, and we never felt the need to return to the physical remote.

With other screens for very little more money cropping up this year, the Sony’s price is maybe a little steep.

But no matter what the content – whether it’s Blu-rays, DVDs or broadcast TV – the Sony is consistently a good; new features, improved interface and connections and a slim build certainly sweeten the pot.

Is it worth a place on your shopping list? We think so.