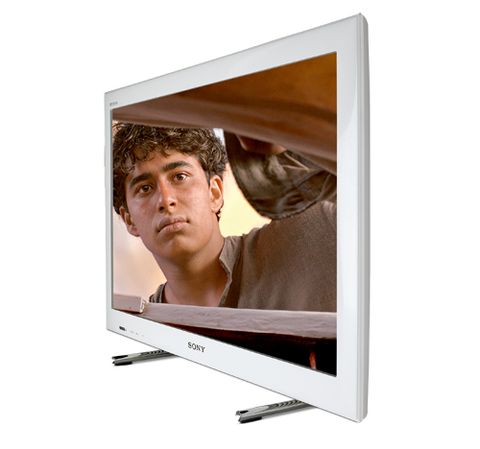 Yes, we know. We did it, too – in fact, the exclamations of “£430 for a 26in telly!? And it isn’t even Full HD? Are you having a laugh?” are still reverberating around the corridors of What Hi-Fi? Towers.

But let’s not be hasty here. The Sony KDL-26EX553 isn’t a cheap TV, that’s abundantly clear – but then neither is it a basic ‘just stick it in the kitchen’ model, either, despite its 1366 x 768-pixel resolution. From the broadband-busting suite of online content available through the EX553, to the neat picture-in-picture and song ID features, to on-screen messages such as “The TV will automatically adjust picture and sound for content suitability and will enter standby if not in use”, you know you’re on to a premium proposition with this Sony.

It’s nicely designed, too. The white bezel might be on the wide side, but it has a nicely textured finish and is offset by the smart-looking stand.

The EX553 comes with a standard lightweight Sony remote. That’s a double-edged sword, depending on how you look at it. It’s familiar and doubtless helps to keep costs spiralling to truly silly heights, but given the care lavished on the rest of this TV’s design, it might have been nice if the remote had that same pizzazz. If you prefer, of course, there’s always the free Sony Media Remote app for iOS and Android…

You could spend all day in the settings menus alone. The amount of options on offer fairly boggles the mind – but if you’re more inclined to sit glued to Saturday Kitchen than you are the Tint/Hue control, the guided set-up will have you up and running with a passable picture (and internet content ready to go) in a jiffy.

If you want to get serious, though, you’ll find all the hardcore tweaky settings you’d expect – right down to options for the light sensor and what happens when you press the ‘Guide’ key on the remote.

For all its depth, though, the interface is a joy to use. Sony’s Xross Media Bar has been around since 2003 and was starting to get rather cluttered – but the version used here is simple, slick, fast and intuitive. Access it and the TV picture shrinks to the corner of the screen in a neat animated zoom, while the menus pop in to fill the space. We wish the key beeps were turned off by default, though (the option is buried in the EX553’s ‘Sound’ settings if you want to get in there straight away).

This TV’s USP lies in its smart features, so that’s where we’ll begin. There are two sides to the internet offerings – one app- and widget-based, and the other housed inside the Sony Entertainment Network (SEN) area.

The built-in web browser is par for the course, but we’re not sure how much use it will be – after all, the kind of buyer this TV is aimed at will probably already have a coffee table littered with internet-enabled laptops, tablets and smartphones. It’s not the fastest online experience, either, with the cumbersome remote control-based text entry proving a tad frustrating, and the lack of Flash support not helping matters.

Anyway, there’s better stuff elsewhere – the social-networking access, for starters. As with the browser, the Twitter and Facebook apps will probably be of limited appeal – but the Skype provision is good. Add the optional CMU-BR100 camera/mic (£90) and you can voice- and video-chat with contacts – ideal if you have far-flung friends but don’t fancy a massive phone bill. Quality is decent provided your network is up to scratch, and the app works in the background, too – an ‘Accept this call?’ message pops up on-screen if someone calls you.

The Opera App Store contains a raft of widgets to download, including AccuWeather, Aupeo! Radio and tons of games and social networking tools. And that’s apart from the SEN, which is bursting with content on its own. You get apps for iPlayer, Demand 5, BBC News, Sky News, LoveFilm, Netflix, Qello HD Concerts, BBC Sport, Break (for videos of people falling off skateboards), YouTube (for videos of kittens falling off skateboards), the Berliner Philharmoniker… it covers the whole gamut.

We particularly like the way the TV picture shrinks in to the corner of the screen when accessing the service, too. It’s a small detail, but it made us smile. (There’s also a neat picture-in-picture option which lets you watch a broadcast channel and a connected device at the same time – although not two TV channels, which might be more useful.)

The EX553’s online picture quality is variable depending on what you’re watching and how fast your internet connection is, of course (you’ll need a reliable 4Mbps for HD video), but it certainly didn’t make us want to turn it off and reach for the laptop. In fact, with a high-def stream of Supersized Earth on BBC iPlayer, you could be fooled that you’re watching a good-quality broadcast.

We do have one gripe, though: why is there no 4oD or ITV Player? They’re on Sony’s PlayStation 3 console, after all – and if this TV is to operate in a second room, it’s likely you won’t have any peripherals connected to it that offer these services.

But this isn’t just an online-access box. It’s also a television, with tuners and everything, so let’s take a look at how it performs its core duties, shall we?

Starting off in standard-definition, it’s a solid performance. Skin tones are reasonably natural (if slightly shifted towards the magenta end of the spectrum), whites are nice and clean and dark areas are appropriately inky. We’d like a little more detail, though: both whites and blacks are a little flat and uniform-looking at times. Move away from garish daytime TV fare and things do improve somewhat, however.

Fire up the Freeview HD tuner and there’s a big improvement in the already reasonable motion. Black detail is better, too, and there’s more information in bright white areas – even if the brightest highlights still blow out. Overall, detail isn’t world-beating, but don’t forget that this isn’t a Full HD set – so we can’t grumble too much.

Step up one more gear to Blu-ray – test favourite Mission: Impossible – Ghost Protocol, in this case – and the news is better still. Motion is nice and smooth, with no apparent smearing or judder, and the picture is good and sharp (although not as crisp as we’d like, due to that WXGA screen resolution). Detail is reasonable, too, even if it doesn’t blow our socks off in the darkest black areas (which, admittedly, do look really inky).

Usually, our moans about the sound served up by flatscreen tellies comes with the disclaimer that it doesn’t really matter too much because you’ll probably be hooking them up to external speakers of some description. But that’s probably not the case with this Sony – and that makes its woefully weedy speakers pretty well unforgiveable. If you’re spending north of £400 on a TV this size, you’ve a right to expect at least a decent amount of body to its sound.

But when you take everything else into account – even the price – we can’t really complain about the EX553. Yes, it’s expensive… but when you consider what it offers, and its target market, that price seems more reasonable – and don’t forget, you can shop around.

It’s the little things we like most of all. From the well thought-out menus, to the feature-rich online offerings, to the TrackID button on the remote (which, when pressed, provides an instant answer to the often-nagging question “What IS that song!?”), to the PVR function with connected USB drives, the Sony is a really classy TV.

If you want a second-room set that pretty much does it all – and looks great into the bargain – this should be high up on your list.