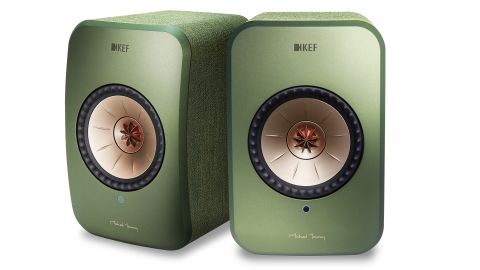 Scaling something down proportionally to create a smaller replica may work for model villages and food recipes, but in speaker design the rules aren’t quite as simple.

The LSX shares its successful sibling’s blueprint as an all-in-one hi-fi system: a network streamer, Bluetooth receiver and amplification within a pair of compact stereo speakers.

But creating the LSX isn’t just a case of simply miniaturising everything in the LS50 Wireless’ anatomy and cutting the price in half. In addition to the smaller cabinets, smaller Uni-Q driver arrays and smaller, 200W amplification, some changes have been made to cater for the price and size reduction.

Rather than combining a Class A/B circuit (to feed the tweeter) with a Class D module (to power the mid/bass unit) as the LS50 Wireless does, the LSX’s amplification is purely Class D. Such a design is compact as well as being more power efficient. This reduces the need for large, bulky heatsinks and means KEF can keep the plastic cabinets (which used to be MDF on the LS50) as small as possible.

The LSX system loses a couple of its bigger sibling’s connections: USB Type B (for computer and laptop hook-ups) and RCAs for connecting legacy hi-fi kit. But KEF has evolved its stereo speaker system concept on the LSX. Since the LS50 Wireless was launched last year, the company has developed its proprietary, wireless inter-speaker connection so, unlike that set-up, the LSX system doesn’t require an ethernet cable to connect the two speakers.

The system can play hi-res files all the way up to 24-bit/192kHz, but will downsample to either 24-bit/48kHz if the speakers are connected to each other wirelessly or 24-bit/96kHz if you do decide to run the supplied ethernet cable between them.

The LSX’s ‘miniature’ description isn’t just relative to its larger sibling. Each speaker is smaller than any passive stereo speaker we can recall testing, bookshelf-friendly and easily transported to another room.

The smaller proportions may make them less of an eyeful than their sibling, but they’re no less bold. The LSX speakers see the return of KEF’s distinct-looking Uni-Q driver array, in which a 19mm aluminium dome tweeter sits in the centre of a 10cm magnesium/aluminium mid/bass cone. And this time the cabinets are, bar the curved baffles, wrapped in an attractive woven fabric.

KEF has been involved in many design collaborations over the years – including the ‘Nocturne by Marcel Wanders’ edition of the LS50 Wireless, the multi-coloured KEF Muos by Ross Lovegrave, and KEF’s Porsche Design Space One headphones. For the LSX system, KEF has had a helping hand from British designer Michael Young, whose signature is subtly printed on the olive green (with gold cone and red tweeter) version.

The LSX has many sources you’ll want to make use of. Over ethernet or 2.4GHz/5GHz wi-fi, users can stream networked music via DLNA or from Tidal – all from within the KEF Stream app. Spotify Connect, Roon compatibility, aptX Bluetooth and Apple AirPlay 2 are also part of the package.

While the LSX’s master speaker overlooks its sibling’s legacy RCA and USB type-B connections, its optical and 3.5mm aux inputs provide means to connect TVs and portable devices, while a subwoofer output offers the opportunity to add more bass to the system.

You can always add a bit more bass by tweaking the balance in the system's EQ settings, which can be found in KEF’s Control app. The app is also used to get the LSX on your network, apply room settings, perform firmware updates and switch sources. The latter can also be performed via the supplied remote – as can volume adjustment – but the LSX lacks the on-speaker touch controls of its sibling.

We’ve mentioned two KEF apps (Stream and Control) in this review, because there are separate apps; one for set-up and control, and another for navigating network streaming. It feels unnecessary given how some rivals manage to integrate everything in one app, but at least you can easily switch between the two without having to open and close them.

Our biggest grumble is the Stream app has a tendency to trip up during playback from Tidal. It’s not the end of the world, but the occasional dropout and delay stops it being a completely satisfactory user experience. Thankfully no such problems occur when we stream from our media server, although the interface does have a simplistic list view, rather than a grid view for browsing music libraries.

KEF is pitching the LSX as equally competitive for its price category as the LS50 Wireless is. We only need to hear the serene drum beat and guitar plucking duo of Nick Cave’s Jubilee Street to know that these KEFs do, to borrow lyrics from the song, “practice what they preach”. From the poised delivery of his first stanza, the LSX are clearly sonic descendants of the expressive, tonally-even and rhythmically astute LS50 Wireless.

The audible assortment of guitar notes, along with the varied emphasis upon each, is credit to the LSX’s transparency, not only in the amount of detail it digs up but also the dynamic discretion it delivers. The placement of the crystal-clear vocal is given no less consideration than the bells that come in subtly beside it.

Warren Ellis’s violin entrance pushes the soundstage’s ceiling and inflates the presentation, while denser electrics and choral accompaniments busy the soundstage but don’t overwhelm the LSX, which appears as comfortable in revealing layers as an expert trifle maker.

Timing is of the essence with any piece of hi-fi kit and, no doubt thanks in part to KEF’s trademark-pending ‘Music Integrity Engine’ digital signal processing, which works to ensure accurate time alignment and phase coherence, the LSX has an assured approach to rhythms.

We switch to Olafur Arnalds’ Ljósið, and the LSX really engages us. Smooth and bodied enough to bring a sweet lushness to the piano-playing, but insightful enough to reveal the varying weight on the keys as well as the slight coarseness in the accompanying violin, its rendition easily carries us through the track’s duration.

While the LSX doesn’t offer the absolute last word in dynamic expression, it offers variation that isn’t bettered at this price point.

Despite the smaller mid/bass driver (10cm as opposed to 13cm) and cabinet volume, it shares its sibling’s relative talent for bass performance. Whether it’s punching out the potent beat opening to St Vincent’s Los Angeles or pushing along the tubby yet tuneful bassline in Mac Miller’s What’s the Use?, the LSX’s low frequency delivery is consistently taut, agile and lucid.

With Tidal streams, the LSX remains cohesive without feeling condensed. Play Shame’s The Lick and the building swamp of electrics underneath thickens the presentation’s consistency but doesn’t drown out its clarity or that of the singer’s deliberately prolonged pronunciation.

The LSX doesn’t defy the scientific logic of smaller drivers and boxes equalling smaller sound, but that doesn’t feel like a shortcoming, especially considering its soundstage is more expansive than that of its closest rival, the Naim Mu-so.

The undulating synthwave that undertows Thom Yorke’s Has Ended (from the Suspiria remake) manages to be atmospheric and room-filling, although naturally the LS50 Wireless would be able to more impactfully mark the occasion with its greater power, scale and dynamic reach.

That, and the extra connectivity, keeps the LS50 Wireless very much relevant in KEF’s streaming system offering. But the presence of the LSX in the line-up feels almost as justified. Here, KEF has managed to squeeze much of its innovative system’s performance and feature set into a more modest stature, offering the convenience and versatility of the tried-and-tested package at a much more accessible price that is relatively budget for an all-in hi-fi system.

Indeed, the LSX is a scaled-down, carefully crafted copycat of its sibling, and for that is just as triumphant. Take heed, rival systems, these miniature marvels are going to take some beating.