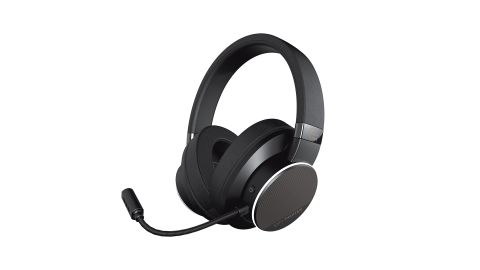 We should make one thing clear from the start: this is a relatively niche product. The Creative SXFI Theater headphones certainly aren’t your run of the mill wireless over-ears – and would probably be a slight disappointment if treated as such.

This is more of a headphone set for the gamers among us who want something that performs well and has some left-field tech to enhance the enjoyment of games and other media. And, as such, this SXFI Theater set-up is really rather good.

What these headphones aren’t, at least in the conventional sense, is Bluetooth cans for going out and about with.

The Creative’s Bluetooth connection comes via a USB dongle – the method also used by its most obvious direct competition, Sony’s impressive Platinum Wireless headset for the PS4.

There is one enormous advantage to this method of connection: it allows for wireless transmission to the headset with a claimed five times less latency than a typical Bluetooth set-up.

This of course makes for a much better user experience when playing games, when hearing and placing sounds is of vital importance. However, the disadvantage is fairly obvious, too: you’re going to struggle with making this headset wireless while out and about.

A conventional 3.5mm headphone cable is supplied, so you can use the headset in the traditional manner with a smartphone, but doing so means the wireless benefits then disappear. The battery life of headphones and dongle is impressive, with a claimed 30 hours of performance between charges.

The other claim to fame in Creative’s blurb on the SXFI Theaters is the company’s Super X-Fi 'headphone holography technology', which says Creative, “recreates the soundstage of a multi-speaker surround system that can rival a real cinema.” It’s a bold claim.

The SXFI Theater gives a good first impression when we take it from the box – the headset is finished in nicely soft leather on the earpads and headband. Also in the box are a USB-C charging cable, the wireless dongle with a charging station all of its own, a detachable microphone, and the 3.5mm cable.

Controls are on the left earcup, with an on/off button at the front, and a mute button, volume wheel and a button to turn on the faux-surround Super X-Fi tech on the back. In between these buttons, on the underside of the earcup, are sockets for the 3.5mm cable, the USB charging cable and the detachable microphone.

The earcups also have rings around them that light up – the light is customisable, so you can create a pair that is unique to you. Setting up the Creative SXFI Theater is pretty simple. You can either plug in the 3.5mm cable for a direct connection, or stick the supplied dongle into your PS4 or laptop and the connection is made automatically to the headphones via Bluetooth.

However, to enjoy the Super X-Fi technology, considerably more effort is required. It’s certainly an interesting concept, with an app to download onto your phone and computer; you then need to (or get someone else to) take pictures of your head and ears for the app to build a bespoke profile so that the sound tech works in the best way for the individual user.

We struggle to get all this sorted; it’s a confusing process, and we are continually jumping between phone, laptop and the headphones to get things resolved. It does eventually come together, but nevertheless we are left with nagging doubts that it isn’t working. Our main tip as far as set-up is concerned, is to use your laptop rather than your smartphone when starting things off.

After getting the sound tech sorted and allowing the SXFI Theaters to run in for a few days, we get down to business. The first thing we notice is that these are extremely comfortable headphones – important for the gaming environment, of course, where hours can slip by with disconcerting ease.

There is a nice balance to the sound with no part of the sonic spectrum standing out unduly. Dialogue is clear, detail is good, and dynamics are pleasing whether we are playing games or listening to music via Spotify. Bass has a nice thump that doesn’t dominate proceedings unnecessarily. It isn’t overly flabby either, which is an easy trait for headphones to fall in to.

Things aren’t as precise as they are with, say, AKG’s K175 wired headphones, but neither would we expect them to be. These are first and foremost gaming headphones, so need to have a broader range of talents. The bass in the Creatives is perhaps a bit fatter than in the AKGs, but that also makes it warmer and a nice comfortable listen.

As far as gaming and watching movies on Netflix and the like, the SXFI Theaters are a decent proposition. Their most obvious competitors are the Sony headset, and while they have advantages over the Creatives – especially when plugged into a PS4 – rather than being noticeably better, the two pairs offer different talents.

When using a PS4, the Sony’s advantage is clear in that the console recognises the headset and shows what setting it is in. With the Creatives you don’t get any information, so have to rely on your memory. And it’s easy to lose track of things.

We give the Super X-Fi tech a good run out and compare it with the Sony equivalent. This will largely be a matter of taste, and it’s certainly going to be something you will want to try for yourself, but for us the disadvantages outweigh the benefits of the technology.

It certainly makes a difference, but the pseudo surround-sound just isn’t as effective as we would like. Where the Sony headset provides “proper” 3D audio, albeit with only a limited number of games, the Creatives can’t quite match it, and things come across just a touch synthetic. Footsteps, for example, sounds somewhat unnatural and are tricky to place, and we’re not convinced we would opt for the mode when playing a game that requires sound to place other players.

In normal stereo mode, however, the SXFI Theaters are good, certainly providing a performance that stands up to that of the Sonys – not better; rather, different. The bass in the Creatives is more rounded and smoother and so offers perhaps a more comfortable listen in the long term with a greater sense of spaciousness, while the Sonys are a touch more crisp and accurate in the upper and midranges.

The strengths of the SXFI Theater’s sound – clear, detailed midrange, a good sense of dynamics and nice punchy bass – are present in all formats, and as such we think they are rather good, if niche, headphones.

They stand up to comparison with the Sony PS4 Platinum Wireless cans, which is praise indeed; certainly one to be auditioned and considered by the gamers and solo listeners out there.