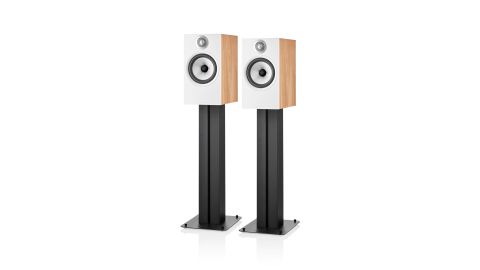 The Bowers & Wilkins 606s walked off with What Hi-Fi?’s top speaker award in 2019. The standmounters got the nod because they offered the best performance per pound ratio of any speaker we tested last year.  So it comes as something of a surprise that they’ve just been replaced – especially as they were introduced only at the tail end of 2018. Why so soon?

Well, the 600 range is now 25 years old. To mark the anniversary, B&W has decided to upgrade the core models – the baby 607s, the floorstanding 603s, HTM6 centre and the 606s on test here – leaving the existing three subwoofers untouched.

On paper, the low-key nature of the revisions leaves us underwhelmed considering the significance of the anniversary. Cosmetically, they amount to the addition of an oak finish to go along with the existing black and white options, and an inscription on the tweeter surround to mark the Anniversary status.

The only performance related change is an upgraded crossover that now features better-quality capacitors, some of which were originally seen in the recently announced and more premium 700 Signature series.

Everything else remains unchanged from the previous generation; a check through the specifications shows no technical changes at all – sensitivity, frequency response, power handling, all remain the same. Let’s be clear though, that isn’t a bad thing, as testified by the 606’s 2019 Product of the Year Award win.

The 606 S2’s cabinet is nicely made and looks really smart in the new oak finish. We compare it with a sample of the last model and the new one marks a small step forward in terms of fit and finish.

While the front is fairly compact, this remains a pretty deep speaker at 30cm, so the smaller 607 model might be a better choice if you’re stuck for space.

The drive unit combination, unchanged of course, is hugely capable and well proven. The tweeter is a 25mm reinforced aluminium dome, and here it’s combined with a 165mm Continuum-coned mid/bass driver. There’s a rear-firing dimpled reflex port to tune the lows, though there are foam bungs to block it if bass starts to dominate.

Ideally, you should place the speakers at least 50cm into the room and well away from side walls if possible. Use the bungs only if you have to, because things sound less natural and fluid with them inserted into the speakers. A slight angling towards the listening position helps to firm up the stereo image.

Any standmounter is heavily reliant on its support, so it pays to budget for sturdy stands. B&W makes a dedicated option called the STAV24 and it’s good value at £119 ($199, AU$345).

We use the 606 S2s with a range of equipment, from our reference set-up of Naim ND555/555 PS DR music streamer and Burmester 088/911 Mk3 amplifier right through to Marantz’s more price appropriate CD6007/PM6007 CD player and amplifier combination, and the speakers work well with it all.

Given the modest nature of the engineering changes we weren’t expecting much of a difference in the sound. We were wrong. While retaining a broadly similar sonic character, the 606 S2 Anniversary Editions prove significantly more capable than their predecessors.

The biggest differences are heard in the bass. The new version is so much more precise and controlled in this region. On an initial listen it would be easy to conclude that the older model has more weight in this area, but given time it becomes clear that the S2s are cleaner, more insightful and have notably more punch.

Listen to the self-titled track from The Scotts and the improvements are obvious, with the new version delivering harder hitting, more layered lows. The previous model sounds bloated and blurred in comparison. The extra control at low frequencies helps rhythmic drive and agility.

Move up the frequency range and the steps up in articulation and clarity are striking. Voices come through with greater subtlety, and it’s easier to hear changes in intonation and phrasing. The Series 2 offers a clearer view of the recording and sounds more balanced overall.

The differences between the speakers are just as stark when we play The Road OST from Nick Cave and Warren Ellis. The title track has a sparse piano opening and we’re struck with just how much more defined and open the new speakers sound.

Their presentation is tauter, and a little more forward than the originals, but also sounds more natural and transparent. Tonally, there’s been a shift away from what now seems like a slightly over-blown bass and overly rich lower midrange to something more neutral.

We change to Bizet’s Carmen and love the way the 606 S2s are so much more dynamic. They deliver a sound packed with authority, and don’t struggle in the face of large-scale crescendos.

As the music builds, these speakers have the composure and organisation to keep things under control. They rarely sound flustered or stressed no matter how demanding things get.

Along with the improved muscle, we’re finding it easier to track low-level instrumental strands and pick up on fine detail. The new model conveys instrumental textures with more skill and locates instruments within the sound stage with greater stability.

The original 606s are fine speakers, but this new version is obviously better across the board. Considering the relatively minor engineering changes that’s a real surprise – but a thoroughly pleasant one.