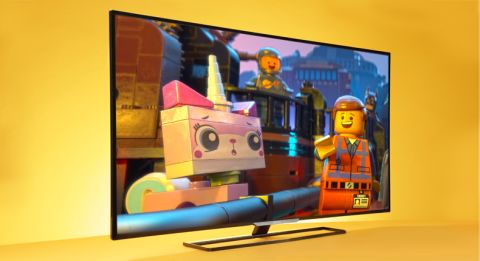 Excels in many areas, but let down by below-par standard definition

Only last month we reviewed our first 48in TV, and – like waiting for a bus – here comes another in no time at all.

This LED telly is part of Philips’s mid-range 5000 Series, which comes in an assortment of sizes.

Reviewing this telly is a mixed experience – it’s thrilling in some areas, but doesn’t do enough in others.

The screen is framed by a narrow black bezel with a silver Philips badge underneath, and it’s not as slimline as some competitors - curving outwards from the top to a deeper body.

It’s still a relatively flat, sleek build though. The stand is a thin black bar, which looks frail but is sturdy.

The TV can be wall-mounted, although connections are at the centre of the back panel – rather than on the side – so access is tricky.

Despite the awkward placement, connections are good: three HDMI, component and Scart inputs. There are also two USB inputs, an optical and headphone output.

We play The Great Gatsby Blu-ray and it’s a crisp, clean picture, brimming with detail.

Outlines are sharp, and there’s depth and texture too. Colour is rich and opulent. Faces look ashen at times and sometimes the picture lacks subtlety, although we are impressed at how the Philips handles motion – it is one of the smoothest we’ve seen.

Switch to broadcast TV (The French Open in standard definition) and we find the TV a relatively poor upscaler when adapting SD content to fit the resolution of the Full HD screen – detail and subtlety are somewhat forsaken for vivid colours and strong contrast. Colours are bright, but there is not enough subtlety.

Skin-tones are lifeless too, and overall the image is a softer, grainier one than we’d like. DVDs draw similar results, so it’s not simply a flawed digital tuner.

On the plus side, Philips’s Ambi-woox sound technology gives a clear, balanced sound, with voices sounding weightier than on most rival sets.

A soundbar would still be a sensible purchase, though, as turning up the volume on the Philips gives it a slightly uncomfortable-sounding edge.

The set has the basic smarts: YouTube, Netflix and BBC iPlayer, alongside Spotify and Absolute Radio, and Blinkbox’s movie-subscription service.

It’s Skype-ready, too, and has Miracast, which lets you transmit any compatible device or smartphone to the screen. Philips’s own multi-room feature lets you wirelessly duplicate the TV’s picture onto another Philips display.

There’s no 3D support, though. The interface is primarily a two-line grid at the bottom of the screen, keeping your programmes helpfully in sight. It’s pretty straightforward to get to grips with, though steering around menus isn’t the easiest.

The remote doesn’t help, either. It feels cheap and sluggish to use. Philips offers a Remote App – free to download on Android and iOS – and it’s not bad. Scrolling left-to-right through pages of logically grouped keys is straightforward, although backtracking is laborious.

The app’s EPG, too, requires several swipes to get anywhere – but it’s handy for checking what’s on without interrupting viewing. Simply Share is another useful tool, allowing access to devices over your home network and TV playback.

It may not be perfect, and struggles a bit with standard-definition material, but if you watch lots of Blu-ray and HD content, this TV won’t disappoint.

If you’re after a sharp, punchy and detailed high-def picture at a competitive price, this is a serious contender for your cash.