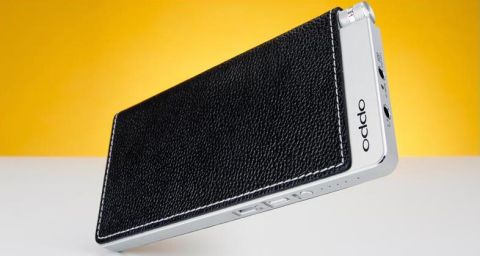 For £250, you’ll struggle to find better detail or dynamics from a headphone amp and USB DAC

Whoever designed the Oppo HA-2 headphone amp and USB DAC is probably the kind of person who enjoys gluing pound coins to the pavement. We embarrassed ourselves attempting to peel back the leather wrapping, expecting a fancy touch screen or pocket diary, but it turned out to be part of the outer design...

Mildly confusing it might be, but the HA-2 stands out aesthetically. And that’s the idea. Really, a product such as this should not be getting lost in the crowd.

To begin with, the HA-2 is about as well connected as Vito Corleone. There are inputs for USB and mini USB and for an analogue signal via 3.5mm jack. The cables for each are included, meaning you can play through pretty much anything.

We’re using an iPod; the HA-2 is designed for iPod, iPhone and iPad, and being only 12mm thick and 175g in weight, it is ideal for using on the go.

There are switches for low and high gain to help headphone compatibility and a bass boost. A full charge takes only 90 minutes for up to 13 hours of battery life. It is well kitted out for a headphone amp and USB DAC at this price.

We play the Frightened Rabbit and Manchester Orchestra collaboration Architect, and are struck by the detail to the sound. The bareness of the arrangement exposes just how intricate and faithful the HA-2’s expression is.

You can hear hands picking the guitar strings, each swell and scratch giving the piece a particular intimacy.

And that character is reflected in the handling of the vocal. The harmonies are full, yet you can hear each voice.

It sounds natural, but most importantly it is engaging. Listening again through the iPod’s headphone output, the piece sounds less dynamic, less articulate and less sincere.

The HA-2’s strengths are probably even better revealed by a track such as Godspeed You! Black Emperor’s Sleep, which, at over 23 minutes, needs its story told well to hold your attention.

So intense do the instruments sound on occasion, they take on an almost anthropomorphic quality – as if making their own march through the piece, depressed, sometimes hopeful and often distraught.

Playing something more upbeat, Marmaduke Duke’s Rubber Lover, we try out the bass boost. It certainly emphasises the kick drum that sets the groove, but detail is sacrificed somewhat.

To us it feels a tiny bit cumbersome, but the option is there for those who want it. In fact, it serves to highlight just how balanced a sound the HA-2 offers without.

Being that tad lighter in the low-end makes livelier tracks such as this feel free. It is anchored enough in the bass, but still buoyant.

Measuring the HA-2 against some competitors in this price bracket, you can find options that deliver more weight and space, but they won't capture so well the life of the music they’re playing.

It’s a combination of dynamics, timing and detail regardless of the genre to which you’re listening that makes the Oppo so adept.

Partner that with the portability, compatibility and creativity of the design, and we’d struggle to recommend anything else.