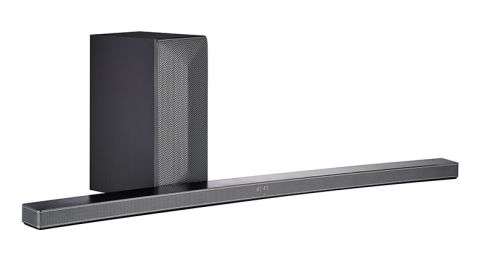 Great features but we expect better sound quality for the money

So, you’ve got your curved LG TV and are looking for a soundbar to match. At least, that’s what LG hopes you’re doing, because the HS8 is the obvious choice.

LG couldn’t pip fellow Korean giant Samsung to the post with the ‘world’s first’ curved bar, but the shapely design is still a novel concept.

According to LG, it’s not simply a gimmick to reflect the recent influx of curved tellies. The company claims that positioning tweeters on the ends of the bendy bar produces an expanded sweet spot for a more immersive experience.

You may see the HS8 billed as a wireless soundbar, but wires can only be cut when partnered with an LG TV that’s compatible with the brand’s Bluetooth-based Sound Sync feature. This includes the likes of the 55UF950V and the Award-winning 55EG960V.

Otherwise, you’ll need to go down the usual wired route via the bar’s single HDMI, optical and 3.5mm inputs. There's an HDMI output, too. The subwoofer pairs wirelessly to the bar, automatically and instantly, whether it’s an LG TV or not. But LG is clearly rewarding those buying into the family here – not just where connectivity is concerned but headline features too.

Part of LG’s multi-room MusicFlow range, the HS8 can connect via wi-fi to other MusicFlow speakers (and Blu-ray players and other soundbars) for use in a multi-room environment. The linked products can play music in concert or play different music to one another.

There are three ways to stream music wirelessly from a smartphone or tablet: over wi-fi using the LG MusicFlow app; via Google Cast, streaming content from compatible apps like Spotify and TuneIn Radio; and, if you don’t have a network connection, via Bluetooth.

Not many soundbars are members of the hi-res club, but the HS8 supports WAV, FLAC and ALAC files up to the full 24bit/192kHz – handy if you have a growing high-resolution music collection.

LG sure knows how to make a soundbar that stands out on a shop floor. The HS8 dons the brand’s familiar silver finish and super-slim design. Clearly designed with practicality in mind, it’s ideal for those with low-sitting TV screens, thanks to its 4cm height.

You’ll just need to account for the bar’s curvature – imagine bending a stainless steel ruler and you’ll be in the right ballpark – which requires your rack to be at least 12cm deep.

One of the company’s new sound settings, I.A sound mode detects the type of content being watched and adjust the bar’s settings accordingly. It’d be easy to keep this default setting on, although the other modes, particularly ‘Standard’ and ‘Music’, are worth a fair trial.

Good features and good design. So far, the HS8 pretty much follows the pattern of LG soundbars. When it comes to sound quality, however, they’ve been a letdown of late, so will the new shape bring new form? We load up Jurassic World Blu-ray to find out.

The relationship between the bar and sub is tight, the presentation feeling well integrated across the frequencies and naturally cohesive. The soundbar reaches a loudness you wouldn’t expect for its size – we wouldn’t hesitate to call it ‘room filling’ – and the soundfield is wide and precise so tracking the dinosaur’s movements across the screen with your eyes closed is easy work.

If sounds such as shattering glass grate on you through your hard, bright TV speakers, the tonally balanced HS8 will keep a lid on any harshness. So when the Indominus Rex sticks its claw through the ride’s glass carriage, it sounds just as sharp and biting as it should.

There are treble (and bass) boosting settings at your disposal, but we never feel the need to toy with them. There’s enough detail and clarity to hold your attention, but don’t expect to be overwhelmed at the insight on offer.

The Dali Kubik One is a fair bit subtler – hearing how hard Bryce Dallas Howard taps on the glass may not seem hugely valuable to your viewing experience, but hearing how the ground crunches beneath a dinosaur’s foot is.

The Dali is weightier and more dynamic too, but competition isn’t the only explanation behind the LG’s downfall. In times of crisis (and there are plenty of those), the energetic score feels a little restrained and undynamic.

The sound of dinosaurs ploughing through metal needs to be weightier and punchier to be impactful, and during one of Chris Platt’s close encounters, the Rex’s growl doesn’t come across quite as menacing as it should.

There’s only so much you can expect from small drivers, and sadly that’s part of the HS8’s problem. More midrange expression is needed for it to rub shoulders with the best in the class too.

In the soundbar world, £700 isn’t cheap, so it goes without saying that shelling out that much should get you a quantum leap in sound quality.

The HS8 delivers in some areas – detail, clarity and volume – but without making a big enough statement with weight, dynamics and subtlety once again fails in its bid as a complete and good-value package.

The world it opens under its multi-room, high-res streaming umbrella is to some extent a saving grace, along with its practical build, glossy design and LG-centred benefits. If you agree that performance is of first concern, though, there are plenty more fish in the sea.