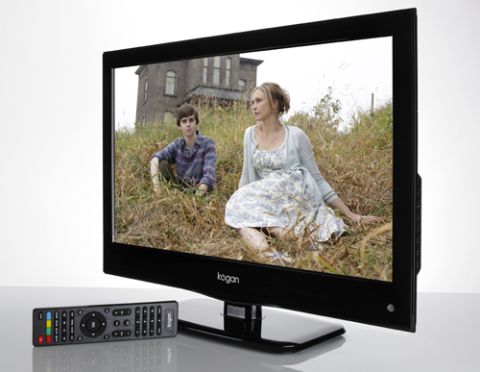 A decent, low cost TV that’s not too subtle in its effort to impress

You may not have heard of Kogan before. It’s an Australian staple, but we’ve reviewed only one of its TVs before.

Still, that set was pretty good – and we’re hoping for more of the same with the Kogan KULED22XXXYA.

The first thing we notice is the price. It’s one of the cheapest sets we’ve come across in recent months. Cheap doesn’t mean rubbish in this case, however.

This set’s build is solid enough (for a little telly) and its picture performance is good. Okay, so what’s the catch?

Well, there’s no built-in DVD player. TVs this size often have one, but we presume Kogan saw it as a way to keep costs down.

It does have a USB port, so you can plug in a hard drive (up to 1TB) and play your own content that way. Connecting a hard drive also lets you use the PVR function to record live TV.

At the back of the set you will find two HDMI ports, and one each of component, composite, VGA and Scart inputs.

You can also buy a separate 12V power adaptor for using the TV in “most cars, caravans and boats”. We were content to stay in our testing rooms.

There’s a nice-looking remote control handset, although it’s a little thin and fiddly to use – calibrating the Kogan’s picture wasn’t quite as easy as when using a chunky remote with big buttons.

Once the set is properly set up, we switch to the standard-def Freeview tuner – and this Kogan is impressive.

It provides a sharp picture with bold, punchy colours. Contrast is strong, and black levels are nice and deep.

We put on The Great British Bake Off and the vibrant red of strawberries make us hungry.

The Kogan suffers a little, however, from the shop-demo effect: the picture isn’t as subtle as we’d like. Bright whites are good, but here they’re just a little intense.

It’s a similar experience as we move to a DVD of The Empire Strikes Back.

The planet of Hoth is very bright, and the snowy terrain doesn’t show up a great deal of subtlety. There’s a nice crispness to the picture, however.

Combine that strength with the punchy colours the set puts out, and the lightsaber fight in Cloud City looks very impressive.

Time for Full HD, and as we flick through a Blu-ray of Iron Man 3, the Kogan’s unsubtle nature becomes more apparent.

The suits of red and gold armour are striking, but the Kogan doesn’t really convey the variations of subtle shading that denote various contours.

We also find it harder to make out Gwyneth Paltrow’s freckles than on another bold-looking TV, such as the Alba AMKDVD22W.

Still, our second experience with Kogan is a positive one. It’s not perfect, but it does enough well that we don’t mind.

And that low price helps to sweeten the deal. This is a cheap and cheerful TV, even if it’s not too subtle about it.