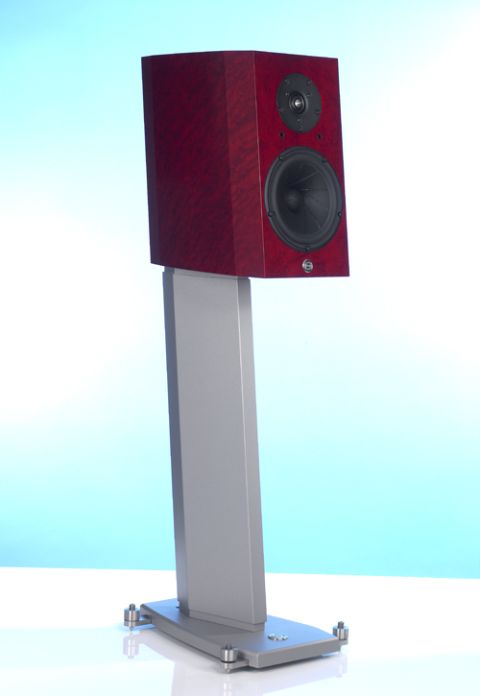 These are some of the best standmounters we’ve heard. If you have the budget and your system is good enough, they deserve serious consideration

Never heard of GamuT? We wouldn’t blame you. This Danish hi-fi specialist has never shouted particularly loudly about its products, which is a shame when they’re as good as the M’inenT M3.

It took us more than a few seconds to work out that ‘M’inent’ is pronounced ‘Eminent’. The name is not the only unusual thing about these GamuTs, either.

We realised the M3s were going to be a little different the moment they arrived.

At first we thought the company had made a mistake, shipping us the considerably bigger M5 floorstanders instead.

It turns out that our review samples were specified with their dedicated stands – at the additional cost of an eye-watering £1230 – and these are bolted on at the factory, leading to some pretty substantial packaging.

There’s no simple way to separate the speakers and the stands so we couldn’t listen to alternative supports.

It’s best to consider this as a complete package then.

Having the speakers pre-mounted on dedicated stands is a great idea from a performance point of view.

The sound of standmounters varies considerably depending on the support they’re placed on, so using the dedicated stands means the M3s perform closer to the way GamuT intends.

On the surface these monitors look like a fairly conventional two-way design, but take a careful look and you’ll find lots of clever engineering.

That distinctively shaped MDF cabinet is designed to reduce the build-up of internal standing waves and is braced to be rigid enough to give the drive units a solid foundation to work from.

Move onto the drive units and you’ll find the wood-fibre cone used in the 18-cm mid/bass driver has been deliberately cut and then hand-coated with damping material to control its behaviour and reduce distortion.

The 38mm tweeter is similarly unusual in its design – it’s a ring radiator with a cone-shaped waveguide to help control dispersion.

GamuT’s engineers didn’t stop there; they have paid an obsessive amount of attention to the crossover design, right down to using in-house designed internal cables.

The aim of all these design elements is to improve resolution and integrate the drivers as precisely as possible, in both frequency and phase terms.

Great engineering doesn’t count for a lot if the build isn’t right, and we’re pleased to report GamuT hasn’t let us down; the M3s are beautifully made.

It’s the priciest option, taking the M3’s price up to £7630, but pick more basic alternatives such as Satin Black, Walnut or Figured Maple and the price drops to the £5140 we’ve listed.

Fit and finish are top-class (as we would expect for the price) and everything from the high-quality biwire speaker terminals to the spike arrangement on those expensive stands speaks of top-quality machining and craftsmanship.

Is this attention to detail reflected in the sound? Yes, it is. The M’inent M3s are terrifically well balanced, sonically.

Provided you accept that no 40cm-tall standmounter with a solitary 18cm mid/bass is ever going to produce enough bass to rattle your furniture there’s little to criticise here and much to admire.

Tonally, they’re spot on. The balance between the frequencies is brilliantly judged, from the relatively authoritative and nicely extended bass right through to the wonderfully textured highs.

Cymbals, in a recording such as Dave Brubeck’s Take Five, sparkle and are delivered with plenty of bite without ever sounding unduly harsh or aggressive.

There’s lots of subtlety in the way those distinctive tweeters reveal the sonic texture of harmonically complex instruments.

Nina Simone’s vocal from the haunting Strange Fruit comes through with a full dose of emotion, with the M3s balancing muscle and finesse with great skill.

If you want the most convincing stereo imaging you’ll have to work at it. We ended up with the speakers wider apart than normal, but angled in strongly.

A good amount of distance from side and rear walls is an advantage. Much depends on the size and shape of your listening room and the talent of the rest of your system, though.

Go too far with the toe-in and the top-end dims a little, but get it right and you’ll end up with a wonderfully solid soundstage; it’s large scale and layered with precision.

We found it impossible to pinpoint the speakers’ position with our eyes closed. That says as much for the quality of the drive unit matching and crossover design as it does for the relative silence of the high-quality cabinet.

You can add a strong dynamic performance to the list of plus points, because these monitors cope with both large scale and small variations in level and intensity brilliantly.

These GamuTs are happy to explode during the crescendos of Tchaikovsky’s 1812 Overture but equally they have no trouble whispering when required. Rhythmic ability is good too.

Rivals such as Totem’s Mani-2s are more enthusiastic when it comes to charging along to the likes of Kanye West’s Power, but the GamuTs’ more measured approach doesn’t dilute the sense of excitement enough for us to have issue.

These are entertaining speakers as well as being informative.

There are certain compromises that have to be accepted when buying a standmounter, even at this price.

Compared with floorstanding alternatives you’ll usually lose out on outright bass power and depth, and there will be less of a sense of authority to the presentation.

However, there tend to be gains in agility and articulation, particularly in the midrange and lower frequencies.

If you aren’t lucky enough to have a listening room the size of a cavern something like Gamut’s M3 speakers could be ideal.

Yes, they’re expensive, particularly with those dedicated stands, but if you have an appropriately talented system they can sound like heaven.