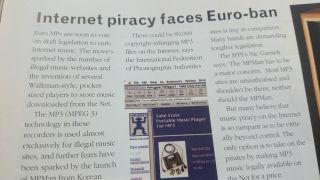 If you're under the age of 20, it's unlikely you remember a time when you couldn't instantly access and download pretty much any music track you wanted.

Even for those of us a little older, it might already seem strange to think of a time before the digital music revolution.

But back in 1998, digital music was in its infancy - and nobody quite knew what to make of it. In fact, the record industry wanted download sites and MP3 players banned.

This news article, which appeared in the Awards 1998 issue of What Hi-Fi?, published in September that year, is a snapshot of that uncertainty.

MORE: That Was Then... Apple iPod review

Piracy was seen as the key issue. There was as yet no legal digital music stores online - relatively few people were online, full stop - already there were instances of music being made available to download for free.

The catalyst for this was the launch of one of the world's first mass-market digital audio players, the MPMan from Korean company Saehan.

The MPMan was a £185 portable player that could store "up to 60 minutes of music". This was followed by more 'MP3 players', as they would become known, from Archos and Creative, before the launch of the Apple iPod in October 2001.

"Euro MPs are soon to vote on draft legislation to curb internet music," read the What Hi-Fi? story. "The move's sparked by the number of illegal music websites and the invention of several Walkman-style, pocket-sized players to store music downloaded from the Net.

"There could be 80,000 copyright-infringing MP3 files on the internet, says the International Federation of Phonographic Industries (IFPI)." A figure that seems positively tiny compared to the 37 million+ songs available on iTunes today.

A spokesman for the IFPI is quoted saying: "The MPMan has to be a major concern. Most MP3 sites are unauthorised and shouldn't be there; neither should the MPMan."

The following year (June 1999) would see the launch of file-sharing site Napster, and the subsequent rapid rise of file sharing and the debate around it, which still continues today.

As for legally available digital music… that was a surprisingly radical idea back in 1998, as we noted: "But many believe that music piracy on the internet is so rampant as to be virtually beyond control. The only option is to take on the pirates by making MP3 music legally available on the Net for a price."

Apple would launch iTunes in 2001, and the rest is history. But as the above shows, it could all have been very different…