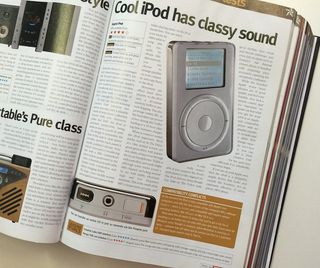 Now that the covers are officially off Apple Music, and the likes of Spotify, Tidal, Qobuz et al can finally see what they're up against, we thought it would be a good time to revisit Apple's first entry in to the world of portable music.

Our first iPod review appeared in the February 2002 issue of What Hi-Fi?, where our relationship with the company's music-loving hardware got off to a promising start.

We called the £349 portable music player a "smart-looking and great-sounding piece of kit", a phrase which has applied to most of Apple's music players and iPhones as they've passed through our test rooms.

The iPod was where the intuitive mechanical scroll wheel made its debut, setting the scene for how users would interact with their iPods for years to come, until the emergence of the touchscreen.

But our review wasn't unequivocal praise. Apple's always been protective and precious about its products and software and this was especially the case when the iPod launched. It may seem hard to believe but the first iPod only worked with Apple Macs - and Apple would shun Windows PCs up until 2004.

It also used a proprietary conector - Firewire - for charging and transferring music across from your Mac. Of course, we've had 30-pin and 8-pin connectors take its place in recent years, but the company's portable devices have always steered clear of more conventional and universal solutions such as micro USB.

Back in 2002 we were also less than impressed with the paltry 5GB capacity. It was enough space for around 1000 songs, albeit highly compressed ones (160kbps). Even back then we were quick to point out flaws in the compression process, noting that some tracks "sound a little clipped".

The Creative DAP Jukebox, on the market at the same time, cost £10 less and was blessed wth a much more generous 20GB hard drive. It was a little bulky (Apple was already ahead of the pack in the style stakes), but back in 2002 we felt it was the better value proposition.

Despite "iPod" becoming the generic name for MP3 players, it was by no means the first to market - even if the product would come to dominate the category.

The iPod's 2-inch backlit screen was clear and easy enough to read, but now it looks tiny (not to mention prehistoric) compared to the gorgeous Retina HD displays you see on today's Apple portables.

Apple's headphones tend to come in for a bit of stick, but in 2002 we felt those supplied with the iPod were of good quality and felt comfortable enough - the portable headphone market didn't explode in popularity until some years later, so the alternatives were thin on the ground.

And we ended by signing a note of caution on an otherwise positive four-star review: "And it's important to point out that what you get for your £350 is an Apple-only compatible player with no graphic equalizer, no radio and a mere 5GB storage capacity." Fair to say our priorities were slightly different...

Thanks to the emergence of the iPhone and the recent death of the much-loved iPod Classic, we're not too sure how much longer the iPod brand is going to survive, but it's clear without the original player, the world of digital music would look very different.

It remains to be seen whether Apple Music can have a similar effect on the streaming music industry...

Read all our Apple news and reviews