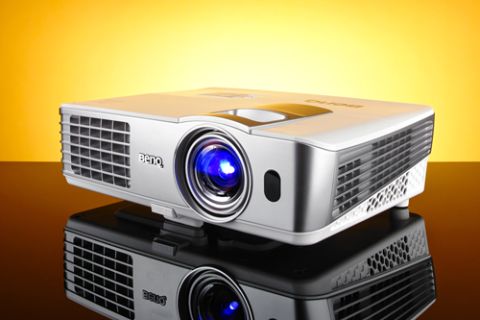 Big-screen entertainment in a small room? It’s not a pipe dream. The BenQ W1080ST projector’s short throw ratio and bright, punchy picture make it a great contender for turning your modest-sized room into a modest-sized cinema theatre.

We tend to deal more with projectors with longer throw ratios. So when the BenQ W1080ST showed up (its ratio is 0.69-0.83:1, if you’re curious), we couldn’t simply plonk it on our usual equipment rack behind the testing room’s sofas.

Inching it closer and closer to the screen until the entire picture fit, we found we could position the projector less than six feet from the screen at maximum zoom.

It’s a great proposition for transforming a small room into a home cinema space, or for playing games on a bigger screen than your laptop or TV.

Setting the focus and zoom is quick and painless using the manual lens adjustment. A tip: any image with a lot of text, such as a Blu-ray film’s disc menu or the Aspect Ratio test on a THX Optimizer disc, is handy for getting the picture into sharp focus.

Given where you’re likely to put the BenQ, you’ll need long cables to connect it to the rest of your AV kit. Furthermore, you don’t necessarily need to place the projector on a dedicated equipment rack – a small coffee table should do fine.

The W1080ST has built-in 10W speakers that are fine for what they are, but we’d urge you to use a proper speaker package to fully enjoy your high-def films. A compact package like the Award-winning Tannoy HTS-101 (£400) is a good option.

The BenQ W1080ST’s picture is wonderfully crisp and clear. Objects are sharply etched, and there’s a good level of detail that makes this projector stand out.

The screen bursts with lively blocks of colour and the overall palette is rich and inviting to watch – although we do think it’s a touch overblown.

Play The Great Gatsby on Blu-ray, and the dazzling on-screen parties are full of punchy lights and glittering jewels.

Sequinned flapper dresses sparkle next to deep dark shades that remain subtle enough to show off the detail in the well-tailored suits. White levels are clean and bright across the picture. It’s a confident performance.

Director Baz Luhrmann’s trademark visual style might be extravagant, but we found that the BenQ does overstate its colours a bit – especially compared with the more natural tones of the Epson EH-TW5910 (£900).

The intense blues and greens could do with a hint more subtlety, as could the earthy tones in the Blu-ray of Stoker.

A THX Optimizer disc is the perfect guide for toning down the colour, but bad news if you’re using digital sources. The colour and tone settings on the W1080ST can’t be adjusted if you’re connected via HDMI; those options are only available when connected to analogue sources.

It’s a shame, but at least you can still adjust the temperature, brightness and contrast of the picture.

Motion isn’t perfect, but it’s smooth and stable enough that it doesn’t bother us too much in the long run. The BenQ W1080ST can play 3D films as well, although it doesn’t include any active 3D glasses with the box. You can buy a pair online for £85.

The projector itself is light and compact, making it easy to position. The white and silver aluminium finish looks smart, too, and the top controls are useful for adjusting the keystone angle and accessing the menus.

The simple on-screen system is easier to navigate using the small but functional remote control. Our one gripe is that there’s no backlight to guide you in a darkened room.

Connectivity is standard for projectors at this price. Two HDMI inputs sit alongside a PC input, while composite, component and S-video inputs are available for analogue sources.

There’s plenty to like about the BenQ W1080ST. Its bright, sharp picture is exciting to watch, and the colours are certainly eye-catching (if sometimes a little too vivid).

It faces tough competition from the Epson EH-TW5910, though, which only costs a handful of quid more but delivers a more natural, subtle picture.

For small-scale home-cinema entertainment, though, this BenQ is definitely worth a look.

See all projectors under £1000