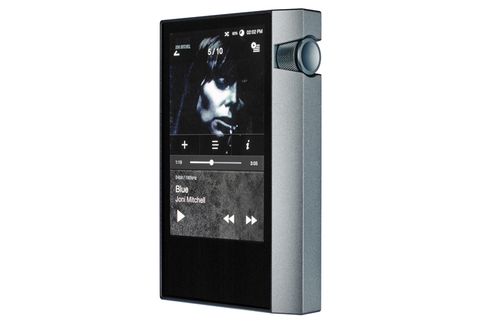 As A&K’s new entry-level player, the AK70 had to be better than the last. And better it is

You don’t need a keen eye to notice that the AK70 music player is an Astell & Kern creation. A familiar rectangular aluminium block with straight edges, sharp corners and a prominent volume dial, it’s A&K all over.

What you might question, however, is its colour. The AK70 ditches the traditional safe silver finish for a cool shade of blue (or is it green?) that the company calls ‘misty mint’.

What hasn’t changed, though, is the brand’s habit of turning out great products.

You could say that comes as little surprise. After all, it does replace a 2015 Product of the Year, the soon-to-be-deceased AK Jr, as the brand’s entry-level player.

This new model does cost £100 more than its predecessor, but that’s still comparably affordable when you compare it to the brand’s flagship £3k model.

A&K is confident this is the ‘most sophisticated hi-res music player you can buy under £500’ (the AK70 is £499), and as it turns out it’s not blowing smoke. Before you even start listening, you know you’re getting a lot for your money here.

The AK70 still supports PCM files up to 24-bit/192kHz (32-bit files are playable, just downsampled) and DSD 64/128 by way of converting files to PCM 24-bit/176kHz; features a built-in microSD card slot, which lets you increase the 64GB of onboard storage by up to 200GB; and has Bluetooth for streaming to headphones and wireless speakers.

But, in a first for an A&K player, it can also double up as a digital-to-analogue converter (DAC), becoming a middleman between your computer and headphones/speakers for better sound quality.

There’s wi-fi too, to accommodate software updates and allow music to be streamed to and from the player. And, along with the standard 3.5mm jack, a 2.5mm TRRS socket caters for balanced headphones.

There’s also a new 3.3in AMOLED touchscreen, which is bright enough for the crispness and saturation for ELO’s Out of the Blue album art to leap off the screen, and the high contrast to do the same for the whites in David Bowie’s Blackstar.

It’s a clear step-up in maturity over the Jr when it comes to interface too, to the point where it’s almost phone-like. We say ‘phone-like’ because, like Sony’s Walkmans, the AK70 adopts the familiar Android operating system.

And ‘almost’ because, unlike the Walkmans, it omits the Google apps and Play Store you’d find on an Android-running smartphone or tablet. That does mean more pertinent menus and less unwanted bloatware for music-player purists, though.

Still, it’s very obviously Android - and we mean that favourably. It’s sophisticated, responsive and lends itself to the player’s functionality. From the usual pull-down menu you can open settings and search for songs.

It’s also where you’ll find repeat and shuffle functions, which eased our initial concerns after not finding them on the playback screen.

That makes it less cluttered, though, allowing album art to fill more than half the screen without overshadowing track information (including file type and size).

Another nice addition is the discreet dot in the bottom quarter of the screen – a shortcut back to home so you don’t have to use the back button to escape folders.

Placed next to each another, the Jr and AK70 look rather like Laurel and Hardy, the former tall and slim, the latter short and stout.

The dimensional discrepancies boil down to just a few centimetres, but it means the AK70 should easily fit into a jeans pocket.

The size is practical and though the sharp corners and edges could do with a little tapering (or you could purchase the dedicated leather case), it’s elegant, particularly the back panel’s smooth, shimmery patterned detail, on which the greeny-blue finish looks especially lovely.

This time the trademark volume dial sits more prominently in a sloped panel on the front right-hand side. The eagle-eyed will notice the slight curve to the dial, which has been designed so your thumb rolls over it from the front rather than from the side, as was the case with the Jr.

The volume goes just as ear-shatteringly high as the AK Jr – the AK70 certainly didn’t need to trump its successor in that department.

Similarities between the two continue into tonal character: it’s just as pleasingly energetic, open and dynamic, although gains in clarity, space and expression don’t go unnoticed in Elvis Costello & The Attractions’ This Year’s Girl (24-bit/192kHz).

Syncopated drumming is not only fuller, there’s more texture around each strike as the AK70 kicks at all the right accents.

There’s more space between them and the shakers, electric guitar and vocal too without losing the rhythmic cohesion that makes A&Ks such effortlessly musical creatures, and which isn’t in any way upset by the keyboard’s late entrance.

The midrange opens up that bit more, so his cool lyrics aren’t swallowed up by the densely fluid instrumentation, instead savoured with that much more nuance.

It’s that subtlety, combined with a natural sense of balance and precision, that makes Max Richter’s Richter: Patterns (cypher) sound so absorbing.

Each piano note drips through the pensively heavy-handed sequence with purpose and dynamic resolve, while the bass drones underneath with a suitably ominous depth and presence.

In its DAC disguise, where its appetite culminates at 24-bit/96kHz, it’s just as useful, more than matching the punch, clarity and detail levels of the AudioQuest DragonFly Black USB DAC (£90).

Even a Spotify stream of Poliça’s Lately highlights the benefits of its presence; it picks out flurries of synths that open the track with greater assuredness than a Macbook’s headphone output.

Bass has more presence and clout, and the processed vocal more prowess.

The sonic improvements made by the AK70 over the Jr are more evolutionary than revolutionary - but that, combined with additional features and a more mature interface, is easily enough to garner another five stars for Astell & Kern.

See all our Astell & Kern reviews