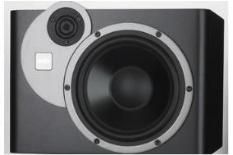 These are genuinely great speakers with loads to recommend them, but the studio looks and excitable treble won’t suit everyone

These are genuinely great speakers with loads to recommend them, but the studio looks and excitable treble won't suit everyone

Now before you turn the page in disgust at the very idea of having a studio-bred monitor in your living room, here us out: these AE22s might be a bit aesthetically challenging, but in terms of sonics, they're really rather excellent.

There's no denying they're the odd-ones-out in this Supertest though: they're a closed design in a field of ported speakers for a start, and they're the only units here that aren't biwirable.

Also, as you've probably noticed, they look rather like a standard standmount speaker placed on its side, with a massive mid/bass driver dominating the face. You might not believe this, but for studio monitors, they're actually fairly good-looking.

Of course, though aesthetics will likely have some bearing on your buying decision, we'd hope that musical ability comes first, and its here that the AE22s truly make their claim to your lounge.

That huge mid/bass driver is capable of producing a fantastically solid and detailed delivery, with a track like Goldfrapp's Caravan Girl benefiting from taut, chunky bass, and lovely clarity in the vocals.

It's not all about the big driver though, and the pointy-centred tweeter is also very fast, precise and in most cases pleasingly sparkly, although it does occasionally get a little sharp, particularly if you're partnering them with bright equipment or playing an overly-compressed track.

This is our only serious criticism though, and in every other musical way, these are great. Try an orchestral piece like Aggressive Expansion from The Dark Knight soundtrack, and the AE22s impress with their punch, dynamism and large soundstage.

Their ability to combine directness and focus with size and atmosphere leads to a performance with an entirely accurate sense of drama, and when the track quietens, they have the rhythm and precision to effortlessly build suspense.

As you can tell, we're big fans of the AE22s, but the competition in this Supertest is so exceptionally high that we've had to raise the bar in terms of star ratings, and although they get remarkably close to retaining their five, the occasional brightness and lounge-unfriendly styling mean they have had to drop to a four. It is a very high four, mind you.