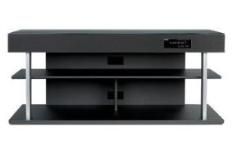 The YRS-1000 has plenty going for it on paper, and it's undeniably convenient and compact, but sound quality is compromised

If you believe the men in white coats at Yamaha, the average viewing height of home cinema fans in Japan is 40cm, while in the UK it's 50cm.

It might not sound much, but that 10cm could make quite some difference to your viewing enjoyment. It's a moot point now: the specification for the Yamaha YRS-1000 has been tweaked for the UK market.

More than merely a smart rack, the Yamaha incorporates a soundbar and amplification. There are three solid shelves, with a 116cm-wide glass top shelf, upon which a 40in screen looks perfectly happy.

Plenty of power on tap
The internal digital amplifier is capable of 112W total power: 62W is allocated to the 'beam drivers', which spread sound around your room, while 50W goes to the YST II downward-firing subwoofer.

After running through the auto set-up system with the calibration mic, we're up and running. Predictably there's plenty of left-to-right panning action, and sounds do seem to come from side walls rather than directly in front of you, but as with standard soundbars, there's little in the way of genuine surround sound.

Can do better for the cash
For maximum immersion we'd use the full '5 beam' mode, but this does leave dialogue a little recessed – switch to '3 beam' or 'stereo' and it becomes much more prominent – while there's sibilance in the midrange, too.

While it's a big improvement on TV sound, the bass rumblings need to be tighter, while explosive effects can sound harsh and bright. It's a convenient all-in-one solution but for £900 we expect the YRS-1000 to sound better.

See all our TV rack reviews