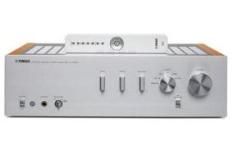 A big, powerful, attractive amp for the money, even if it’s not without competition

There's something reassuringly old-school about the Yamaha A-S1000 amplifier, and this rather big – almost 14cm tall – and heavy – 22kg – amplifier is beautifully built.

And so it should be: it's closely related to the £1495 A-S2000, principally lacking only that model's fully balanced design.

Only the preamplifier has been simplified, and even here there's a triple parallel design for volume and tone, and a high-quality moving coil/moving magnet phono stage.

Effortless power, easy to match
There are four line-ins, separate sockets for preamp out and power amp input, and two sets of speaker outputs per channel to allow A/B switching or facilitate biwiring.

The A-S1000 delivers 90W per channel, and sounds effortlessly powerful. It isn't the fastest or most attacking amp, but it has that ‘big motor' sense of effortless delivery and bags of oomph in reserve, even when you play large-scale music at pretty serious levels.

If there is a downside, it's not that this amp is ever lacking in drive or dynamic ability, rather that the tonality is on the generous side of neutral, rather than straying into any top-end brightness.

Still, that makes it supremely easy to match with other sources or speakers, even if it won't keep metal fans pinned to their seats