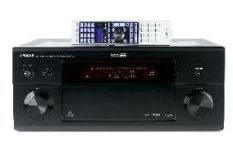 As befits a £2000 home cinema amplifier, Yamaha's bruising DSP-Z7 is bristling with sockets and features.

The Z7 upconverts any input video signal to HDMI, and upscales the same signal to 1080p; it decodes all HD audio codecs; it can power as many as four zones; and it's packing five HDMI inputs and two outputs, in case you run a TV and a projector.

Add in wireless networking, unburstable build quality, accurate mic-driven auto-setup and a useful remote control and the Yamaha reads as if it should be worth the money.

More importantly, it sounds as if it's worth the money too. Playing the Dolby TrueHD soundtrack of The Dark Knight, the Yamaha extracts prodigious levels of detail, punches with implacable solidity and steers effects with alacrity.

Big dynamic shifts are handled dismissively, voices are well integrated, and the soundstage enjoys a rare uniformity and cohesion.

More than capable with every kind of audio
Lesser formats are treated with equal assurance – the Z7 has pitiless authority over the toughest soundtracks and the fussiest speakers.

It's also pretty musical by the standards of its peers. Ultimately it lacks outright subtlety and timing can be hit-and-miss, but there's no shortage of attack or attitude.

Using the aforementioned upconverter/upscaler, there's no that doubt standard-definition movies and TV are more watchable as a result.

The simple HDMI throughput, where audio is stripped from the incoming HDMI source and the pictures passed through to a display, has absolutely no impact on picture quality – whatever goes into the Yamaha comes out intact.

So it ain't cheap, but sometimes – like here, for instance – you get exactly what you pay for.