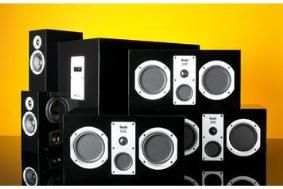 As ever with Teufel, there’s plenty of box for your buck, but it simply needs to be more capable sonically

Teufel is pretty excited about this system. As you'll deduce from the name, it has been given the THX Ultra 2 stamp of approval; no mean feat.

According to THX, the Ultra 2 certification aims to bring the “cinematic experience to larger home theatres, 3000 cubic feet in size, with a viewing distance of 12 feet or greater from the screen” – which goes some way to explaining the size of these speakers.

Subtle, it ain't. The package contains three S800 FCR (front, centre, right) speakers; large blocks which, despite their size, are designed to be wall-mounted via attachments on the back.

They're obtrusive but they're also fairly easy on the eye – yes, really – and smartly finished.

Going in the right direction
The rear channels are taken care of by two S800 D ‘dipole' speakers.

When mounted on the wall, they fire both forwards and backwards. When placed to the left and right of your seat they should make for a cohesive surround sound.

Last but far from least there's the subwoofer: simply one of the largest subs we've ever seen. It's huge. We refer you again to the THX requirements on room size.

Unless you fancy a new gloss-black footrest, complete with intermittent vibrations, you'll need a big corner for this.

Predictably, this system isn't found wanting when it comes to delivering weight and scale.

The explosive action of Terminator 2 on Blu-ray fills our room, the governor of California's shotgun delivering a powerful thud and the ensuing motorbike chase providing plenty of excitement. Those dipoles do a good job of spreading sound, too.

For all the sub's power, the sound is soft and woolly when really tested.

We'd imagine most people would struggle to accommodate this system in the average front room – and we're not convinced, at this price, you should go out of your way to make the effort.