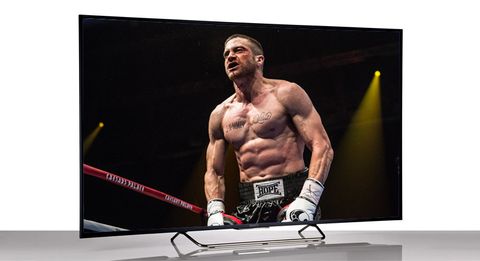 A strong argument for sticking with Full HD

It’s easy to get lost in the hubbub surrounding the future of television. OLED, UHD and HDR: all impressive and exciting acronyms, but we shouldn’t forget that existing TV tech is still very good. After all, Full HD has been the standard for years. Both quality and price have been thoroughly honed.

Take the Sony KDL-65W855C, a midrange model in Sony’s 2015 range. It’s ‘only’ 1080p LED display, but it’s rather good nonetheless. The video performance is impressive enough to hold your attention.

We begin in Full HD with a Blu-ray of Birdman, where Michael Keaton is levitating in his dressing room. It’s a clean, sharp picture. The clutter and brickwork in the room are solidly defined, and there’s little noise to speak of. We’d like more in the way of fine textures, but this is more a small niggle than a full-blown fault.

LED panels don’t have the best reputation when it comes to contrast, but this Sony puts in an admirable effort. Whites are bright enough to occasionally dazzle. Dark scenes are capable of looking much closer to black than grey. On our sample, we found backlighting to be nicely even.

Birdman is a colourful film, and the KDL-65W855C really laps it up. The reds, blues and yellows that permeate the Broadway theatre are deep and vibrant, yet balanced and natural with it.

A note on 3D: this set supports active-shutter glasses, but they’re not included in the box as standard. You have to order them separately at £50 a pair.

Step down to standard definition with a DVD, and the quality holds strong. There is an inevitable increase in picture noise, but even then we see the same traits: balanced colours, good contrast and solid edges. Freeview and Freeview HD performance is similar, only with the inherent fuzz of terrestrial broadcast added.

Fresh out of the box, the TV will need a bit of tinkering. The default settings are not ideal, so we used a THX optimisation disc to tweak the picture.

Much of it is down to personal taste, but we’d suggest starting with Dynamic Contrast Enhancement turned off – that will give you more accurate control over brightness and black levels. Noise reduction is effective, but it does trade a little clarity for definition. Keep motion processing on the ‘standard’ setting – the effect is subtle enough and won’t make your films overly glossy.

Sadly no amount of adjustment could solve the one big issue here: the viewing angles. We find it to be quite narrow, so if you have a room with varied seating positions, those on the side may have issues with washed-out contrast.

The TV’s sound is just fine. There’s enough detail and definition, and the reasonable amount of weight on offer ensures the performance is never shrill or harsh.

The sound quality of flat screen TVs has improved of late, and this one is good enough so we are not compelled to reach for the soundbar straightaway.

The Sony KDL-65W855C isn’t just a pretty picture – it has smarts too. Sony is among the first to adopt Google’s new Android TV platform, which is nice but not without fault.

Firstly, it’s pretty, clear and intuitive. Google’s clean-cut Material Design philosophy has been copied over from the mobile world, and it looks lovely on the big screen.

What does need fixing is the lack of content compared to the likes of Samsung and LG TVs. For streaming, you’ll mainly be looking at Netflix, Amazon Instant Video and Google Play. There’s no Now TV, and the UK’s main catch-up services haven’t appeared yet. This will be rectified when YouView is added to this TV (and all of Sony's Android models) over the summer period.

You can work around this, however. Android TV supports Google Cast, which means you can load BBC iPlayer and Now TV on your smartphone or tablet, and ‘cast’ it to the TV. Not ideal, but it’s an alternative.

The bundled remote control is fine, but the best way to navigate is to use the TV SideView app. This gives you more comprehensive control than the standard remote control, and also shows you the TV guide.

The hardware side is a bit more comprehensive, and is up there with pricier sets. There are four HDMI sockets, three USB ports, a component-composite hybrid, scart and optical digital output.

The Sony KDL-65W855C is a tempting proposition. It’s not class-leading stuff, but we’re impressed with its blend of quality, features and price.

If you’re not fussed about the latest bells and whistles, or you’re happy to wait until the dust settles on the latest format war, this is a great way to get a 65in screen for less than you might expect.

See all of our TV reviews