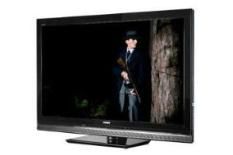 The Sony impresses in all areas, although it’s the backlight issue that costs the set a valuable star

It's quite surprising how little Sony has done to separate this generation's V and W model televisions.

Other than ever-so slight styling alterations, the KDL-52W5500 adds only 100Hz to the already-impressive raft of features of the KDL-52V5500.

This certainly makes a difference, with this set proving once again that Sony is the master of motion processing.

The busy, bustling streets of the Slumdog Millionaire Blu-ray pose a huge challenge to this type of technology, but the Sony renders every individual in the mass of bodies with superb sharpness, even as the camera moves in the opposite direction to the actor.

Detailed images to suit all
Even those who have a tendency to find this sort of motion unnatural are sure to find a balance between the 100Hz Motionflow and Film Mode that looks right to their eyes.

In every other aspect of performance, the V and W screens are just about identical, so once again we're left marvelling at the stunningly sharp and detailed images.

The Mumbai slums are alive with colour, and the Sony ensures none of this is lost on its way to the viewer.

The superb contrast levels that have so impressed us on Sony sets of late is present here, so the bright lights of the film's Who Wants to be a Millionaire? set stand out piercingly against the black backdrop.

Standard definition impresses
It's similarly challenging to separate the two Sony sets playing standard-definition. The Forgetting Sarah Marshall DVD is upscaled and deinterlaced with just as much detailed aplomb here as it is on the V, and the same minor degree of shimmer to edges again fails to spoil the overall excellence of the picture.

The identical colour balance makes the skin tones of our local news presenter look as natural as they really are, and the sound performance is just as clear and balanced.

This closeness in performance of the two Sony sets suggests real consistency in its output.

Unfortunately, it also suggests consistently poor backlight, as this W suffers identically to the V – even to the extent that it's the same areas of the screen in which the blotches are most evident.

This makes it equally impossible wholeheartedly to recommend, paving the way for another manufacturer to take the lead in big-screen LCDs.