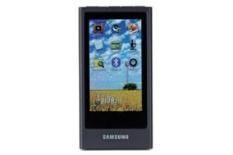 One of the best small-capacity, big-screen players we've tested, and affordable too

It's been just a month since we first saw Samsung's sexy YP-P3 player, but already it's available for £20 less than the official price of £130.

That makes it almost identical in price to the all-conquering iPod nano, and certainly on first sight, the Samsung looks a far more luxurious prospect.

It's a fairly large unit by nano standards (although not as big as the SanDisk Sansa View or Cowon S9), and rather than go for feather-lightness Samsung has opted for reassuring solidity.

This means that it's less-suited to something like a gym-friendly armband holder, but it's a stylish, premium unit to have on the street.

The P3 is controlled using what Samsung calls the EmoTure interface. This means that as you swipe or prod the display with your grubby digits, the unit responds by vibrating slightly.

It's really not as exciting as Samsung would have you believe, but it's also unlikely to offend. If you do feel the need to turn it off, it's worth noting that the option is (rather bizarrely) hidden away in the player's sound menu.

Customise your home screen
The touch interface itself isn't bad, but operation does exhibit a bit of lag, and the icons and menu design aren't as obvious or intuitive as they should be.

Still, the home screen looks very nice indeed, and can be customised with the icons you're most likely to use.

If you want iPlayer content, you'll have to use Windows Media Player, and if you want lossless or uncompressed tunes you're going to have to rip into FLAC, which neither WMP or the bundled EmoDio software support.

Ditch the headphones first
So, getting decent content on the P3 can be a bit of a pain, but once it's on there the results are pretty good.

So long as you ditch the nasty, shouty bundled headphones and avoid the DNSe 'sound enhancement' feature, music has very decent detail, balance and weight.

Although it lacks the sparkle and excitement of the best, it avoids harshness and proves perfectly listenable over long periods.

Video is also impressive, thanks to the large 16:9 screen, which offers vibrant, sharp pictures with good motion and decent detail.

Indeed, if regular movie watching is your priority, this is probably the player to get, but if music takes precedence there are better options.