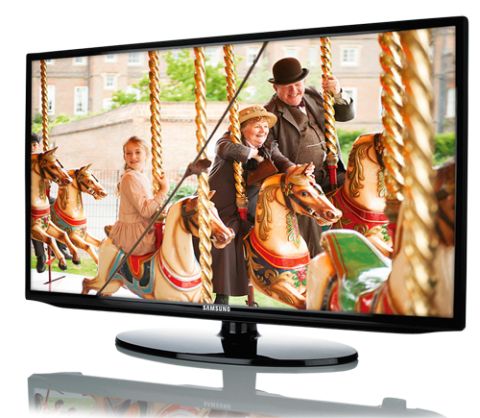 Fine for the money; but needs more dark detail and some catch-up services would be nice

You don’t always get what you pay for. Sometimes that isn’t a good thing – after all, everyone has at some point forked out an over-the-odds sum for something that proved to be a damp squib.

But sometimes you can find a product that doesn’t require you to hand over wads of cash, yet still delivers the goods. This Samsung UE32EH5000K is one such piece of kit.

On paper it doesn’t look like it’ll set the world on fire. The UE32EH5000K doesn’t have the usual raft of smart features you usually get on Samsung’s TVs, for instance.

There’s no BBC iPlayer access, no movie streaming, no Skype… media-savvy features are limited to playback from connected USB drives and cameras. It’s a no to 3D too, but there is a Freeview HD tuner on board.

Peek round the back and you’ll see a fairly basic complement of connections: two HDMIs; component, composite and RGB Scart inputs; and headphone and optical audio outputs. There’s also an ethernet socket, but don’t get your hopes up – it’s just for firmware upgrades. On the side is a single USB port.

But while you’re pursing your lips, take another look at the price. What were you expecting for £270? More features means more money out of your pocket, after all.

Now take another look at the physical design of the EH5000: sure, it’s on the chunky side, depth-wise (9.3cm to be exact), but the bezel is thinner than you usually find on less-expensive tellies, and the stand, while plasticky, has at least had an aesthetic nod paid to it.

We put the Samsung next to the £535 Sony KDL-32HX753, which picked up a Best Buy Award this year. Yes, there’s a pretty hefty price difference there, but that’s the standard the EH5000 is up against.

Plugged in and turned on, we flick through the preset picture modes before doing any calibrating. There are four on offer – Natural, Dynamic, Standard and Movie – the first two of which give the picture an unnaturally harsh, contrasty appearance.

Movie mode is better, but you might not be surprised to hear that we alighted on Standard (which we then tweaked using a THX Optimizer Blu-ray). Likewise, there’s a variety of audio modes… out of which we again chose Standard, and then did some minimal EQing.

So, it’s on with the show with a daytime TV staple. We’d usually go for Homes Under the Hammer – after all, those different colours, textures and interior and exterior shots are almost tailor-made for telly testing. Also, we’re nosey and like to raise an eyebrow at people’s interior design choices (white carpets? Really?).

Today, though, we start off serious with BBC News 24. Again, it’s a good tester thanks to a variety of shots and scrolling text – and the news, at least in terms of this TV, is pretty good: motion is smooth and the edges of that sliding text are clearly defined (if a little processed-looking at times).

It’s not quite up to the standards of the Sony, but nor were we expecting it to be. Contrast is decently punchy, with black areas appearing nice and dark, if not the most detailed we've ever seen.

Paying a brief visit to Nigella's kitchen, we notice that reds are a tad overblown, while greens, likewise, could do with toning down a bit. It's tweakable to an extent, but don't go too far or you'll compromise the rest of the picture.

The picture is considerably cleaner than in standard-def, as you'd expect, with only a hint of that edginess pesent on the SD tuner. Again, though, there could be more detail in darker areas of the picture – fabric seemed a little uniform at times.

The whole thing is well presented, however, and the black levels and overall brightness of the picture (if not the detail within in absolute terms) definitely punch above their weight for other TVs around this price.

Just be careful with the controls – there are brightness and backlight controls, and it's all about finding that balance between them. Whack them up too high and, yes, the picture will be punchy – but it'll also blow all the detail out of the light areas.

The programme guide is easy to use, too, although it would be nice if it alerted the user to HD versions of standard-def broadcasts when choosing them, as some other sets do.

It's the same story with DVD and Blu-ray. Motion is handled well, with tricky slow pans dispatched without too much issue (remember, this is only a £270 telly). Black detail in high-def is an improvement on its lower-resolution cousin and flesh-tones are more convincing, too.

The Samsung never quite manages to get the colour balance right – again, there are those reds and greens to try to tame – and there can occasionally be a waxy quality to skin tones, but that's quibbling a little here.

Since you probably won't be hooking this TV up to a full-on surround speaker system, let's pause for a second to talk about its sound. Well, it's a flat-screen – so don't go expecting trouser-flapping bass.

It isn't awful by the standards of its class, though – there's more weight than you might expect, dialogue is clear and, while it's pretty devoid of finesse, it does the job. There are five sound modes, plus an EQ, so it should be pretty easy to strike a balance you like.

You could do a heck of a lot worse for this money. We love the fact that Samsung has clearly really put some effort into making the EH5000's picture as good as it can be within its budget constraints, at the expense of headline-grabbing bells and whistles. That's laudable – but we can't help wanting something a little extra.

Chances are, this set will be used in a second room – and second rooms are where people tend to catch up on programmes they've missed. It's not a big thing, but the inclusion of BBC iPlayer at least would've really put a grin on our faces.

As it is, though, that grin is more of a very big smile. The EH5000 is a great little telly, and although we have our reservations concerning a few aspects of the detail levels and colour balance on offer, we think you'd be getting a good deal if you decided to part with your cash.