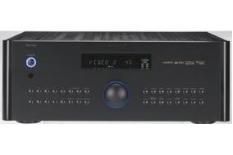 Forget the specs; this Rotel is an awesome multichannel amp, even if it’s not quite the best

If Pioneer, with its SC-LX81 receiver, has gone down the route of glossy luxury, Rotel's opted for subtle minimalism with the RSX-1550.

Sure, there are plenty of buttons on the fascia, but the regimented symmetry of the layout means it's very pleasing on the eye.

The spec list is rather different to its contemporaries, too – in that it's very short. There's no auto-calibration or equalisation here. Nor is there a network connection.

What's more, there are just five in-built power amplifier channels, and they're only rated at 75W each – frankly measly in this price sector.

Modest spec sheet is no concern
Tackling these ‘gaps' one-by-one, however, proves that none are terminal.

Firstly, manually adjusting speaker levels and distances is very easy, and in our experience generally produces better results than auto-calibration.

Secondly, networkability on a receiver is a bonus, not a must-have. The same could be said for built-in power amplification.

You can always add a stereo power amp if you want to go down this route. As for the Rotel's ‘lack of power', it's insignificant once you start listening.

Each crunch of colliding cars is presented with eye-wincing scale and detail, from the sparkly jangle of smashed glass hitting concrete, to the squeal of straining tyres and the punch of metal hitting metal.

All of this is accompanied by the growl of our heroes' Porsche Cayenne, which the Rotel produces with rib-cage rumblingly deep bass.

If this overall excitement doesn't quite carry over to stereo music, it's not far off, and the Rotel is still punchy and attacking by multichannel amplifier standards.

If you're still concerned about the ‘missing' specs, remember the most important ones are all present: four HDMI inputs and one output, with full HD audio decoding, surprisingly decent upscaling to 1080p, upconverting to HDMI, as well as support for three extra zones.

So we're not going to knock the Rotel down a star for its missing bells-and-whistles. Nevertheless, we do have to penalise it in light of the emergence of the even more impressive Sony STR-DA5400ES.

Still, if a stylish, superb, back-to-basics receiver takes your fancy, this is the one to get.