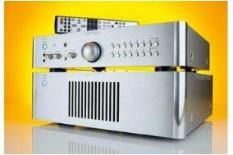 A likeable, fully featured performer that delivers much for the money

In the UK, Rotel is best known for its long-running success with budget amplifiers. But the Japanese company is no slouch at higher price points. There's a feeling of real quality about this product, and the strong impression that it's seriously built to last.

The RC-1580 (pictured here above the partnering RB-1582 power amplifier) is a fully featured preamp. The handset isn't particulary good, but elsewhere there's much to like.

It has tone and balance controls – something of a rarity at this price level – and enough line-level inputs to accommodate even the most complex stereo system, along with two tape loops and a headphone output.

It's the preamp's MM/MC phono input that catches our attention, though. Most rivals don't include one, arguing that there are plenty of good quality outboard units available. That it reduces their manufacturing and design costs is less often stated.

The phono stage is a good one, too, delivering a high level of clarity and a good dose of dynamics. It's decently quiet, too.

It pays to partner with Rotel's power amp
In combination with the RB-1582 power amp, the RC-1580 delivers an understated yet enjoyable sound.

There's not quite the transparency or timing precision of similarly priced alternatives from the likes of Cyrus, but there remains enough of both to keep us listening.

As you would expect, there's no trouble delivering the massive dynamics swings of The Dark Knight OST. Low frequencies are thumped out with control and venom, and scale and authority are both top class, too.

Given something smaller-scale and challenging, such as Nina Simone's Feeling Good, this pair pleases with its delicacy and drive. The midrange is expressive, while the highs are a neat combination of bite, insight and refinement.

This Rotel preamp just gets on with the job without drawing attention to itself. That makes it well worth an audition.

Read all our preamp Best Buys