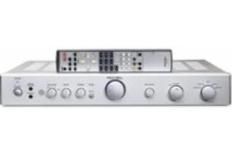 Still a great amp, but new rivals (including wee brother) mean the RA-05 drops a star

Rotel's 06 Series includes three integrated amplifiers, and the RA-05 sits between the £250 RA-04 (essentially the same spec, but without remote control) and the £500 RA-06. Available in black or silver finishes, the exterior is smart, solid and slimline, though nothing revolutionary to look at.

Underneath lies plenty of jiggery-pokery of which Rotel is justifiably proud. There's a Rotel-manufactured power supply doing the vital donkey work, and a symmetrical circuit-board layout, which keeps left and right channels separate and signal paths as short as possible. This combines to deliver 40 watts of power per channel and – more importantly – a very fine amplifier.

Ruthless efficiency
Despite its lithe appearance, and the fact that its power specification is pretty low on paper, one of the Rotel's most impressive sonic characteristics is how staggeringly easy it finds its work. The Raconteurs' Store Bought Bones offers plenty for it to think about, but like an experienced parent with a gaggle of kids in a sweetshop, this amp is ruthlessly efficient when it comes to control.

Basslines delve deep while remaining tight, while treble is clear, open and full of sparkle, without ever sounding bright or brash. Listen to any of the choral works on Eric Whitacre's Cloudburst album, and the Rotel shows off its expertly balanced tonal range.

Delicate presentation
Bruce Springsteen's homage to Pete Seeger, The Seeger Sessions, is a breathy, intimate recording, which finds the Rotel uncovering mountains of detail. Every croak from the Boss' voice, every delicately plucked guitar-string is full of expression, creating a frighteningly realistic sound.

However, the RA-05 has one problem: the RA-04. The cheaper machine sounds better. We're not talking about a massive gap in performance levels, but give both amps an equal-length warm-up, demo some familiar tunes, and we're sure you'll detect ever-so-slight doses of extra clarity from the RA-04.

It would appear the absence of remote-control-enabling electronics – remember, of course, remote control needs built-in help to operate the commands – creates a purer sound. The leading edge of a bass note, the clarity of the soundstage: all these areas are just a sliver better.

So if it were our money, we'd save £100 and live without the remote control.