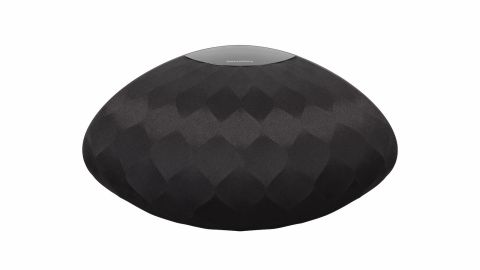 The Wedge has a balanced, cohesive sound that cannot be ignored – and that makes it a class-leader in its category

To say that Bowers & Wilkins’ Formation Wedge is simply a much-needed update of the company’s highly successful Zeppelin is to do it a disservice.

Yes, it’s a roughly elliptical multi-driver wireless speaker. Yes, the amplifiers are updated versions of those used in the Zeppelin and yes, we think it could well be just as popular as it’s iconic predecessor, but wireless audio has come a long way since the Zeppelin debuted eight years ago in 2011 – when the high-end, wire-free speaker market was in its infancy.

The Formation Wedge is part of B&W’s Formation series. It’s a standalone wireless speaker, but is also optimised for multi-room integration with other Formation series models, such as the excellent B&W Formation Duo active stereo speakers.

Underneath each of those is a 9cm midrange driver similarly amplified by 40W, and in the middle a 15cm, 80W subwoofer brings the driver total to five – and the amplification up to 240W.

From the front, you’d think this was a flat-backed, half-moon ellipse, but it’s actually an interesting, if slightly divisive, 120-degree wedge design. At 23cm tall, it’s larger than you might imagine too, and as such, sits well in a corner.

On top of the unit, there’s a small light-up display for basic volume and play/pause functions, while the rear panel has the feel of quality craftsmanship.

For playback, there’s Apple AirPlay 2, aptX HD Bluetooth and Spotify Connect, and like the rest of the Formation range, it’s Roon Ready. B&W recommends using the Roon app as your main music playback controller, but you also need the dedicated B&W Home app for initial set-up. After a few attempts, we've connected the Wedge to an iPhone and our wi-fi network.

While Roon is strongly recommended, it is possible to play music without it; just launch your preferred streaming service (we streamed from Apple Music, Tidal, Spotify and Qobuz) and look for the Wedge under available devices. You can also adjust EQ settings using the B&W Home app.

The B&W Home app is surprisingly ill-suited to handling your day-to-day music, though – especially if you’ve investing in several Formation products. For that, B&W recommends the Roon music management subscription service ($499 for life or $119 per year). It ties all of the inputs and outputs into one app, while also giving you access to music on other Roon-ready devices, including network players and servers.

Both apps work well, although things can get a little complicated. Give zones in both Roon and the Formation app the same name and they won’t necessarily line up. Some groups of products in Roon won’t show up in Formation but, given that the Formation app is needed to set up of your system, you can’t just use Roon.

Between the two apps, every detail and function is covered, but a more comprehensive Formation app that takes care of everything would have been preferable to having to fork out for a third-party service.

Ultimately though, you don’t have to use Roon, especially if you’re just using the Wedge as a solo, stand-alone speaker, where AirPlay 2, aptX Bluetooth or Spotify Connect will work just fine from your phone or tablet.

We play Glass Built Castles by Black Peaks on Spotify and the foreboding drums, bass and guitar cacophony that feels like a huge wall of sound on occasion is also lively, deep and aggressive. Interspersed with ponderous, pensive vocals, there’s no shying away in terms of dynamic impact here.

The Wedge isn’t afraid to let you hear the truth when it comes to detail, either. Each instrument comes through with the space around it to emphasise its distinguishing features, but more importantly, there’s competence in how those sonic details impact the song as a whole.

Vocals are clear, textured and emotive but never over-emphasised. Any edginess through the treble, of which some wireless single-box designs might be guilty, is not to be found here. The effect is of a layered, insightful and cohesive performance, that’s expertly balanced throughout the sonic spectrum – wherever we are in the room.

Switching to a largely instrumental track, we stream Maggot Brain by Funkadelic on Tidal. The delicately picked electric guitar is ever-present, underpinning the crystal-clear power chords as they burst in. The Wedge continues to handle timing extremely well, even in passages where the track itself seems to lose its way. Calm, controlled, clear. This B&W never loses its cool.

The Wedge has few direct rivals on the market, but we reach for the excellent, and more expensive, Naim Mu-so 2. Both are superb in their own right, but offer a different sound character, so while you’ll get more bass clout from the Mu-so 2, there’s greater refinement, detail and clarity with the Wedge, which offers a more layered, hi-fi sound by comparison.

Despite the fact that the Mu-so 2 has a greater array of embedded playback options and doesn’t require a third-party subscription to reap the benefits of locally-stored music, the B&W Formation Wedge offers the kind of detailed, balanced, cohesive sound that cannot be ignored – making it a class-leader in its category.