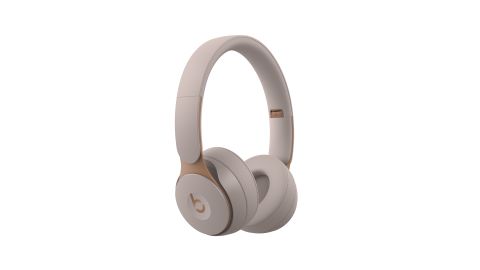 It’s not often that bass doesn't appear in the against column for Beats headphones, but this pair is well-balanced and has great noise-cancellation too

“The Solo Pros are transformative,” says Pharrell Williams as he twiddles knobs in his studio. “There’s like a switch that goes off in my mind. It’s just like, ‘Oh, that’s it. It’s ready’.”

Far be it from us to argue with the 13-time Grammy Award winning producer, musician and vocalist, but we suspect he isn’t actually using these £270 wireless cans in the studio.

In fairness, The Neptunes producer has only really put his name to a few matte colourways and they look rather decent too. Our sample is in Dark Blue, which, along with Light Blue and Red, is one of the three additional finishes to the Beats staples of Ivory, Black or Grey.

There are more expensive wireless headphones around, but the Solo Pros fit well into the premium category – and that is backed up by the build and finish. The action as you adjust the headband is rewardingly smooth and the padding of the headband and earcups feels substantial. Even the foldout cuboid box held together by magnets is satisfying to unwrap.

They’re remarkably easy to use, turning on as soon as they are unfolded. It just takes the hold of a button to pair to your device via Bluetooth, and all volume, song-skipping and call-taking functions are performed by tapping the earcup.

Thanks to their Apple association, like most Beats headphones, the Solo Pros are compatible with Siri, if you’re using them with an iOS device.

The headline feature, though, is the Solo Pros’ noise cancelling. Like many other brands, Beats is offering not only full-on muting of environmental and ambient noise – with real-time audio calibration monitoring just how much cancellation is necessary – but also a Transparency mode that filters more noise in so you’re not entirely oblivious to the outside world.

Turn it all off and you can extend the Solo Pros’ 22-hour battery life to up to 40 hours of wireless listening, or use the ‘Fast Fuel’ function, which gives you three hours of playback for just ten minutes of rapid charge.

We’re used to some pretty bold boasts about noise-cancellation on product websites, but in this case, Beats could have gone bigger. If not absolutely silencing our surroundings, the Solo Pros are able to deaden it to such a degree we can almost hear thoughts being constructed in our brain.

It’s also helped by the way the Solo Pros clamp around our heads. In terms of isolation, this scores highly; in terms of comfort, not so much. Being an on-ear model, this tightness rather pins your ears to the sides of your head, resulting in mild discomfort after about ten minutes. Use them for the whole of that 40-hour battery life and it might become an issue.

These are probably the most mature-sounding Beats headphones we’ve heard. Bass response has long been a sticking point with Beats: the balance is often skewed, low-end detail is minimal and to call it slovenly would sometimes be extremely kind. Not so with the Solo Pros.

There’s still plenty of low-end kick and a pleasingly full-bodied overall tonality, but they’re extremely well balanced. It means now we can enjoy what is an entertaining and detailed presentation. Certainly, it favours more energetic, beat-heavy music, but there is still plenty of resolution to delve into and a feeling that it is being presented as music rather than mere information.

Space is perhaps not hugely abundant – especially when noise cancellation is switched on to full – but instruments are generally well organised, and it isn’t as if they’re jostling for position. Mostly the Solo Pros are adept at keeping an arrangement orderly and making sense of why each element is where it is in a mix.

They’re held back somewhat by a looser sense of timing and less sympathetic low-level dynamics than the class leaders, such as Sony’s WH-1000XM3s. The Sonys are a shining example of a pair of headphones that offer superb noise-cancelling, and both energy and delicacy when it comes to performance.

It’s not as though the Solo Pros are completely disgraced by Sony here, but there is a clear step up that, given they’re now available at the same price, equates to a star being dropped.

However, Beats customers tend not to purchase its products on sound quality alone ­– the design, build and noise cancelling ability of the Solo Pros will be more than enough to tempt many into buying them.

The difference is that this time you’re getting a really good audio performance as well. We don’t want to stick our necks out too far, but we’ll happily say this is the most enjoyable Beats presentation we’ve encountered. Just be wary if you have a massive bonce.