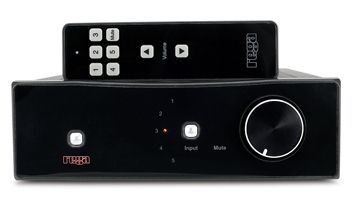 Rega’s long-running Brio has always been a fine budget amplifier, but this latest version is arguably the best one yet.

It’s built into a half-width casing, similar to the one used for the company’s excellent DAC, and feels immensely solid. The feature list covers the basics: four line-level inputs, a moving-magnet phono stage and a remote control.

Most rivals add at least a headphone output and switchable speaker to that list, but Rega has chosen to keep things simple in the pursuit of better sound.

And one listen to the Brio-R is enough to convince us that the company has achieved that commendable aim.

Agile, musical and rhythmic
The Brio-R is an immensely musical amplifier. It sounds agile and detailed, and sniffs out a rhythm track brilliantly.

Despite a relatively modest output of 50 watts per channel, the Brio-R can get decent volume levels out of most speakers and deliver large-scale dynamic sweeps such as those from Holst’s Jupiter with ease.

More than that, though, it’s the way this amplifier ties together musical strands that really impresses us. It’s the kind of product that puts the music, be it Eminem and Rihanna on Love the Way You Lie or The xx’s debut set, centre stage.

Start listening, and it’s the music itself that always grabs your attention, rather than any particular hi-fi virtue. And that, of course, is exactly the way it should be.

Excellent phono stage
The phono stage delivers a great performance too. It’s impressively transparent, and consistent in character to the line stages. And that means that it’s vastly better than what we usually hear – or expect – at this price point.

This Rega is a clear level better than the best of the budget amplifiers, and good enough to worry the likes of Roksan’s Kandy K2 and Naim’s Nait 5i in some respects. That makes it a terrific buy.