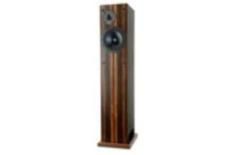 Best floorstander £1500+, Awards 2011. The Response D18s may look ordinary, but are capable of spellbinding sound

ProAc has rarely made glitzy speakers. The company's products tend to look quite ordinary – and these Response D18s seem to follow that trend.

Take away the classy Ebony veneer – a £400 premium on the price we've listed – and, physically at least, you have nothing more than just another slim two-way tower.

Technically, it's a similarly uninspiring story. There's a mildly interesting downward firing port arrangement and an acrylic phase-plug for the 16.5cm glassfibre-coned mid/bass driver, but little else of note.

These floorstanders' presentation strikes that rarely achieved balance of sounding sweet and refined while still delivering decent attack. There's an underlying warmth to the sound, but it never extends to overt richness.

What you get instead, is a lovely, expressive midrange coupled to a beautifully well-behaved treble. Integration between the two drivers is seamless, and the Response D18's top-to-bottom cohesion
is deeply impressive.

The ProAcs' stereo imaging is also excellent. These towers throw out an intricately layered soundstage that remains stable for a wide range of seating positions.

A formidable array of talents
You can add good timing, strong dynamics and the ability to play loudly without excessive hardness to the ProAcs' long list of plus points, too.

This array of talents means that these towers are as capable on Beyonce's I Am... Sasha Fierce as they are with Mahler's Symphony No.6.

Flaws? It's fair to say there are other (larger) floorstanders that will deliver greater bass power for this kind of money, and, by the very highest standards, the D18s are just a touch soft at the very lowest frequencies. We won't make too much of either, though, because neither intrudes on the musical experience.

The Response D18s are an immensely compelling proposition. In a suitably talented system they're capable of delivering an extra-large slice of sonic heaven. That makes them a bargain – even at two grand.