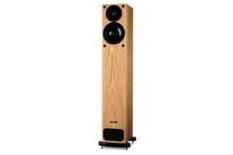 The i version of PMC's older GB1 speakers blew us away when we gave them the First Test treatment back in April, and we're happy to report that, almost a year on, they still sound just as impressive.

Out of the box it strikes you that these are fairly lightweight cabinets, even though they're solidly built and pleasingly finished. The two drivers are placed close together at the top of the unit, and apart from spikes that seem intent on constantly cross-threading, first impressions are very good indeed.

Select Bonnie Prince Billy's Wolf Among Wolves and the clarity is downright astounding. The midrange especially is so clean and detailed that it reveals all of the nuance of the achingly beautiful vocal delivery, while also revealing the texture of the acoustic guitar. It's not that this sounds like a decent reproduction of the recording, it's more like being in the room during it.

Poised, organised performance
This track also demonstrates terrific organisational qualities and an extremely accurate stereo image, but that's not to say they can't do big and open, too. Try Future Markets from the There Will Be Blood OST, and although it becomes clear that the PMCs don't have the bass extension of some here, they are able to create a wide, deep soundstage with balance and poise.

There is also a degree of smoothness to the delivery. This means every recital is balanced and pleasant, but it also means that there's a small degree of snap and punch missing. Like a Dog Chasing Cars from The Dark Knight OST, for example, has plenty of rhythm and dynamic drama, but the PMCs just fall short of delivering every last ounce of the track's vicious attack.

Going back to the bass, and although the PMCs aren't able to reach this soundtrack's almost sub-sonic lowest frequencies, the bottom end is still taut and detailed.

If your priorities are a superbly-organised sound with awesome clarity, these speakers will meet and exceed your requirements in stunning fashion.