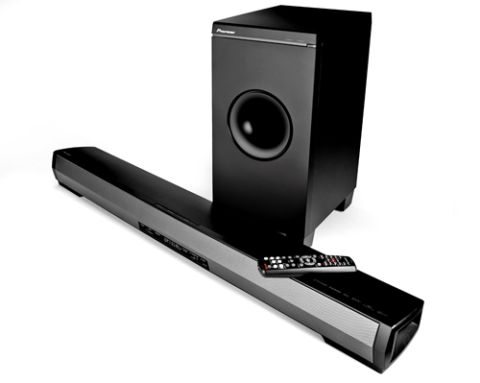 Rich, detailed and dynamic, the N700 gives the Award-winning Philips HTL5140 a run for its money

While some brands are entering double-digit territory on their number of soundbar models, Pioneer remains content with its three-strong debut range.

Its flagship model, the SBX-N700 (which earned four stars earlier in the year from us) has had £100 knocked off the price, and returns to our test rooms once again.

You can play music from your smartphone via Bluetooth or wi-fi direct, or send the phone's screen display to your telly thanks to the N700's Micracast compatibility.

YouTube videos on a phone can be sent to your big screen, and DLNA functionality means files on your home network can be accessed too.

There are two digital optical audio connections, plus a 3.5mm minijack input and USB connection for music playback, but no HDMI input. There is the solitary HDMI output for connecting to your TV.

USB and 3.5mm inputs are front facing, while the optical input, HDMI ARC output and LAN socket can be found at the rear.

A ‘Night’ setting compresses dynamics to prevent sudden shifts in volume from disturbing the neighbours and Auto Level Control evens out volume across source inputs.

But be aware: settings can be changed only by using the on-screen menus via the TV input; spontaneous flicking between sound modes during DVD playback, for example, is a no-go.

Rich, balanced and with plenty of detail, the Pioneer’s performance is a solid one. It takes some tweaking to get the right delivery, though: play Total Recall Blu-ray and midrange sounds a little distant – gunfire feels muted and voices seem a little boxed-in. But a press of the ’Dialogue’ button on the remote makes a world of difference, giving much clearer character, and, in turn, more subtle detail.

Voices are insightful and well projected: you can hear the desperation in Colin Farrell’s, as his character, Quaid, struggles to work out his identity. We recommend using the remote to reduce out-of-the-box bass levels for better balance. Explosions still have depth and floor-shaking power, if you do, but more subtlety and definition, too.

Although we criticised the bass for being a touch soft in our first review (it lacked the weight of rival Yamaha YSP-1400), the N700 can happily match rivals at this new, lower price point. Treble has bite – as enemy Cohaagen flicks out his knife, it sounds defined. And as Quaid races against time to free his girlfriend and stop the enemy, the N700’s dynamic handling of the frantic score gives a welcome sense of tension and energy.

We’d ignore the bar’s ‘Surround’ mode. The midrange becomes less distinct, and the soundfield is roomy enough as it is anyway. ‘Gaming’, ‘Movie’ and ‘Music EQs’ offer degrees of customisation, too, but we found the latter delivers the best results for most content (changing EQs can only be achieved through the on-screen menu, which is accessible via a HDMI connection between the TV and soundbar, so changing it during a movie is a no-go).

We wouldn’t hesitate using the N700 for music playback: we play Lorde’s Team over Bluetooth and its handclaps and beats have punch and precision, and good timing, too. Vocal delivery has nuance, and space between the two voices afford the soundfield clarity and imagery.

The N700’s smart black-and-grey matte finish is more in keeping with its new price tag. It’s one of the sturdiest builds in the budget market, spreading the width of a 42in telly and fitting just below a TV screen without the optional 2cm feet attached.

It intrudes on the bottom of our screen slightly – that’s without the two optional 2cm feet attached – so it doesn’t exactly sink into the shadows of the TV stand.

But neither is it distracting, and there is a wall-mounting kit provided, too. We’d check your tabletop has enough space in front of your TV before you buy, though.

Volume, input, sound modes and set-up menus can be controlled by a neat remote but there's also an app, too.

Pioneer’s neat and comprehensive ‘Control App’ (free, iOS- and Android-compatible) is a gateway to most of these features, and acts as a controller for general soundbar functions – although we expect most people will prefer the supplied physical remote for everyday use, thanks to its logical button layout.

Obviously the Pioneer benefits from its price cut. It’s not always a given that a large price drop earns a product another star, but in this case, the Pioneer proves itself worthy.

It’s now better featured than any soundbar we’ve seen at its price, and outperforms all but the Philips HTL5140 when it comes to sound.